Visit Hillberry Art Gallery to meet Mariánne Eriksson who has had 10 successful one man exhibitions with excellent reviews from newspapers around South Africa. She works in pastels, watercolours and acrylics, her new home is  where she has opened Hillberry Art Gallery.

ARTIST EXTRAORDINAIRE IN KZN, SOUTH AFRICA
Mariánne Eriksson (nee Smit) was born in East London, on South Africa’s south coast in 1952. She first showed her literary potential by winning an essay-writing contest at age 6. She has been an artist since she was 12, starting with Chinese miniatures, and studied art at Eunice High School (where she was day head-girl in 1970), Bloemfontein, Free State, South Africa. She studied fine art at the University of Pretoria, Tshwane University of Technology where she obtained her Diploma in Art and Design, followed by further studies in Paris.

Her first one-man exhibition was in Port Elizabeth (South Africa) in 1975, where art critics described her work as “intelligent, good and eclectic in style”; on opening night, 26 of her 36 displayed works were sold. She spent a year in Paris, France in 1976, painting and studying, and thereafter had eleven further successful one-man exhibitions. In fine art, she developed from a realist to a largely romantic impressionist, sometimes an expressionist, but always painting to classical music. Mariánne is sometimes an abstract symbolist, and a colourist at heart, influenced and inspired by the famous French artist Raoul Dufy. Some of her paintings have also been inspired by second cousin, the Late Philip Tobias, the renowned international palaeo-anthropologist. Mariánne’s art is in collections in South Africa, Switzerland, France, Germany, Canada and the USA. She lives in Hilton, KwaZulu-Natal, South Africa, with her husband, Patrick, emeritus professor of geology, two dogs, four cats, a cornucopia of visiting birds, field mice, bush babies (lemurs), monkeys, and a beautiful garden with colourful flowers, a swarm of wild bees, and wonderful big trees. 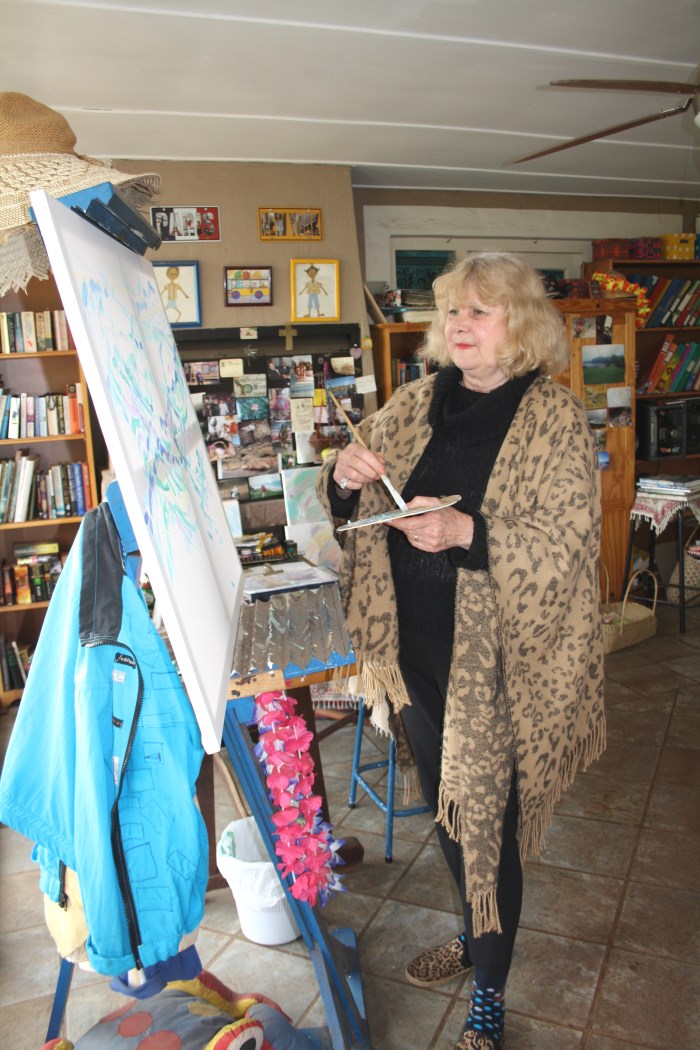 She first published in 1979, a childrens’ colouring-in book, and thereafter worked on the Konki and Lonki series of 13 books, and published the first three in the series privately in South Africa. She also found a publisher in Houston, Texas who promoted her books in 23 countries. Some of Mariánne’s writing skills stem from another second cousin, Alan Paton, famed author of the internationally acclaimed book Cry the Beloved Country. As an artist, she works mostly in pastels, watercolours and acrylics, and does her own illustrations for her childrens’ books, in gouache and ink.

The books are available at R200-00 including postage direct from the author, or visit the gallery and buy one for your child (readership 4-8 years old).

Contact details
Address: 12 Walters Road, Hilton 3245, KZN, South Africa
E-mail: This email address is being protected from spambots. You need JavaScript enabled to view it.
Cell: 071-178 6760; landline: (27) 033-343 4853
Enjoy the selection of images in the gallery here and visit to view many, many more on Saturdays from 10h00 – 16h00, otherwise by appointment only.
Mariánne invites you to come and enjoy a cup of tea or coffee, or a glass of champagne!
Submit reviewRecommend
Images (24)
Map
Reviews (0)