Address:
Worlds View Road, Hilton, KwaZulu-Natal, South Africa, 3245
Telephone
+27 (0)78 226 2990
Cell:
+27 (0)78 226 2990
A BRIEF DESCRIPTION OF WORLDS VIEW CONSERVANCY
EXTENT & ESTABLISHMENT
The Worlds View Conservancy (WVC) covers just over 10 000ha and is roughly triangular in shape. Its eastern boundary is Old Howick Road (R103) from Ashbourne Grove in the south to Celtis Road in the north, the western boundary follows Celtis Road southwards and then the Transnet railway line, from where it exits the Cedara tunnels to where it crosses Mbubu Road, and the southern boundary is the northern limits of the suburbs of Sunnyside, Boughton, Prestbury, Clarendon and Wembley. See at the bottom of this section, a map of the conservancy.
WVC is predominantly covered by commercial plantations but there are significant pockets of undisturbed, original grassland and indigenous forest.
The conservancy is traversed by two disused railway lines, one built in 1885 and the other in 1915, and the Voortrekker Road, all of which are of historical and heritage importance.
WVC was established at a public meeting held on 23rd August 2010 is registered with Ezemvelo KZN Wildlife as a conservancy and has an agreed constitution.
AIMS & OBJECTS
WVC’s Aims and Objects are to promote, through sound management principles, the conservation and maintenance of the total environment in the conservancy and to restore the natural biodiversity of the fauna and flora of the area through, amongst other things, the eradication of invasive alien vegetation.
MEMBERSHIP
The current membership of WVC is many residents of Worlds View with a few from Hilton. Membership fees are R100 per individual or R200 per family, including children under 18, per annum.
PROGRESS
Several cleanup projects have been conducted by residents of Worlds View, mainly in the northern areas of WVC and around the Worlds View look-out site.
Signage has been erected all around the boundaries of WVC to sensitise the public to the area and what is and what is not allowed within WVC.
There has been considerable liaison between WVC and the plantation managers with regard to the eradication of invasive alien vegetation and the limiting of plantation within natural watercourses. This has resulted in the re-establishment of a major wetland at the source of the Ketelfontein Spruit.
OFFICERS
Current officers for 2018 of WVC are;
Chairperson - Hugh Temple 082 821 0048 Vice Chairperson – Howard Richardson 083 591 0079
Secretary - Kingsley Pooler 078 226 2990 Treasurer - Rod Torr 083 303 4316
MAP OF WORLDS VIEW CONSERVANCY 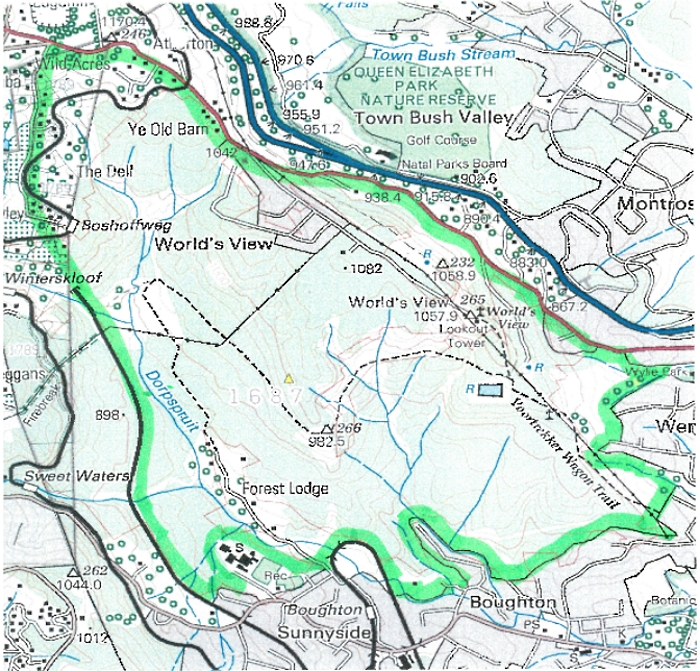