On 29th January, 1872, Hilton College, opened under the headmastership of William Orde Newnham, with one assistant master and a matron. They came on horseback or in wagons, for the only railway line in Natal at that time was between Durban and the Point. In fact, the railway did not reach Pietermaritzburg until 1880. So, Hilton opened in a South Africa where diamonds had only recently been discovered, where there was as yet no knowledge of the gold of the Witwatersrand, and where the founding of Johannesburg was not to take place for another fourteen years. Newnham introduced the English public school system and appointed the first prefects in January, 1873. 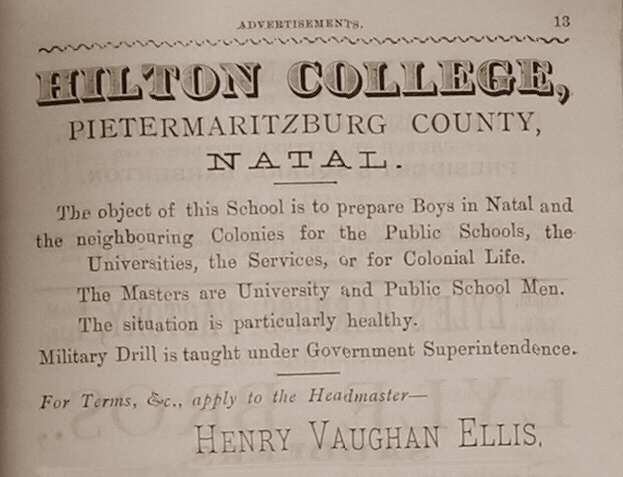 In Newnham's day the rising bell rang at 6 a.m. and classes ended for the day at 4 p.m.At the end of 1877 Newnham returned to England and the lease of the school was taken over by Henry Vaughan Ellis, who was destined to be headmaster until 1904. During this time the Hilton College of the twentieth century began to be moulded.

In 1860, Gould Arthur Lucas, who was one of the survivors of the 'Birkenhead' disaster, purchased part of a farm which he named "Upper Hilton". In 1855 an Anglican priest, William Orde Newnham, arrived in Natal. He opened a school in Pietermaritzburg, where he first met Lucas. Later Newnham decided to join Lucas at Upper Hilton and to open a school on the property. Thus we can regard Newnham and Lucas as the founders of Hilton College.

Many were the achievements during the long reign of Ellis. He imprinted indelibly upon the life of the school the main characteristics of the public school system as known in England, but modified it to suit South African conditions.. As a former pupil of Rugby School, Ellis brought much of the Rugby tradition to Hilton; thus began an unofficial link between the two schools, perpetuated today in the Hilton crest.

Hilton was the first Natal school to play rugby football, and to Ellis goes most of the credit for Hilton's early prowess in the game.

During the headmastership of Ellis South Africa was disturbed by three wars - The Zulu War of 1879 and the two South African Wars. In the second South African War of 1899-1902 Hiltonians were to be found on both sides, for while Natal boys joined the British forces, boys who were burghers of the Transvaal and the Orange Free State went on commando. After the unhappy war, the bonds that united all Hiltonians were resumed and the bitterness of the war was forgotten. 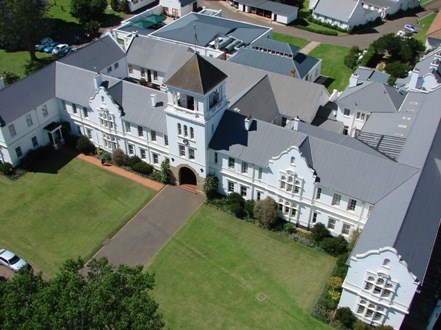 Ellis became the owner of Hilton when he bought the property from Lucas in 1882, but as time drew near for his retirement it was obvious that a school which was the headmaster's property could not necessarily be assured of continued existence. It was at this stage that a group of Old Hiltonians, former pupils of Newnham and Ellis, formed a company known as Hilton College Limited. The company bought school from Ellis, and thus the ownership of the school by its Old Boys began. This was in 1903.

In 1906 William Falcon became headmaster. Falcon was to guide the destinies of the school until the end of 1933. He must rank as one of the great headmasters, not only of Hilton but of Natal. During his headmastership the William Campbell building was completed, the chapel was built and the buildings ceased to be red brick and came to be built in the Cape Dutch style.

On the 31 March 1928 the original shareholders of Hilton College Limited signed a Solemn Covenant of Dedication which, in 1930, established the Hiltonian Society, a non-profit sharing association of the Old Hiltonians which has owned and controlled the school ever since. The shareholders of the old company made a gift of their shares to the Society.