The Story of Sweetwaters & Winterskloof

Situated on the north western fringe of Pietermaritzburg and nestling between the Swartkop and Teteleku ridges which enclose the head-waters of the Dorpspruit, is a beautiful, verdant and undulating valley. In all seasons, swirling mists expose some beautiful natural forest and short savanna grassland. The gentle rush of meandering stream water can be heard as the numerous small tributaries cascade and churn towards the Msunduzi floodplain.

Blue and grey duiker, bushpig, genet, mongoose and vervet monkey are also known to find a 'home' in this picturesque conservancy area, covering an area of approximately one thousand hectares.

In pre-historic times, the Stone Age hunter-gatherer San people hunted varieties of buck and wildebeest in the nearby Mgeni valley gorge, there having being a number of pre-historic camp sites found in the vicinity. It is even suggested that elephant tracks might in earlier times have been identified in the lower Dorpspruit catchment area, as fossilised footprints were claimed to have been found near to the old Voortrekker barn at Summerwood.

Most certainly there is evidence of early wagon trails and archaeological remains as the various pioneer parties of 1836 - 1837 wove their precarious routes south-eastwards. There is evidence for example, of a number of encampment sites on the Hendrie farm at The Knoll, made by the early Dutch trekkers prior to their descent into the upper Msunduzi and Plessislaer meeting areas. 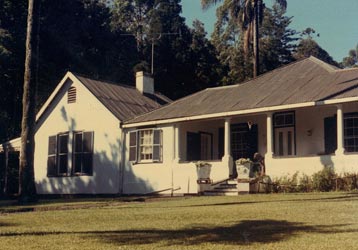 Some people believe that the old oak trees at The Knoll might possibly originate from acorns brought up from the Cape during the Great Trek. One certainty, is that following the British annexation of Natal in 1843 large farm tracts adjoining the townlands of Pietermaritzburg and the then recently established Zwartkop Tribal Trust area were ceded to British colonists and Voortrekker pioneers alike.

Various portions of the Winterskloof valley were awarded to British colonists and remaining Voortrekker pioneers. The farms Groenekloof (2955 acres) and the farms St Michael's Mount (885 acres) as well as St George's Mount (662 acres) were prominent in this area and formed the nuclei for future sub division and habitation.

Extract from The Story of Sweetwaters and Winterskloof by C & M Lake.