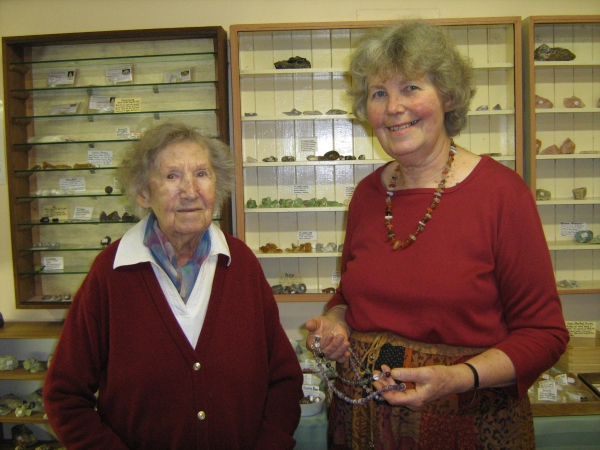 Jackie Younghusband of Zori's Specialist Crystal Shop in Hilton recently welcomed HiltonVillage.co.za in for a cup of tea, and very good tea it was! It was an absolute delight to hear a little of the interesting history that seeded the shop we all enjoy today.

It all began way back in 1959 some 1500 kilometres away, in Harare, Zimbabwe which was then known as Salisbury, Rhodesia. A seventeen year old Jackie was reading a Popular Mechanics magazine when she found herself fascinated by an article on tumbling stones. This fired her with inspiration and since her father and brother were both about to celebrate their birthdays, Jackie suggested to her mother Chrystal that the tumbling equipment would make a fabulous combined birthday gift. None of the equipment was available in Salisbury or even in Rhodesia at that time.

Both father Harry and son Hilmar, were enthusiastic about the machine. The Bosch family saw an opportunity to begin a small family business. They went on holiday to South Africa returned home to mineral rich Rhodesia with all the necessary equipment to cut and polish stones and the findings required to create simple jewellery designs.

The exciting business venture began humbly with Chrystal successfully selling pendants at work during her lunch breaks but soon both she and Harry were both able to leave their jobs and focus on their gemstone business, 'Chrystal's Jewels'.  Chrystal's jewellery designs quickly established the success of the home-based business.  Some years later, they sold the business and went on to found 'H. Bosch and Son', the new business focused on faceted coloured stones. Harry and Hilmar, designed and manufactured the 'Red Devil', an innovative faceting machine.  Harry died in 1970 but Chrystal and Hilmar carried on with the business. Hilmar became a qualified gemologist and now runs a successful internet gemstone business.

In 1973 Jackie married John Younghusband, an aircraft engineer with a passion for stones.   John and Jackie moved to South Africa, first to Durban and then to Pietermaritzburg. 'Zori's' was founded in 1978 and from 1980 to 1993 was established in Harwin's Arcade. The name Zori is derived from the Ruwenzori Mountains in the Congo. It was in this area that a five year old Jackie had found her first special stone, during an African tour her family had taken in a large custom built caravan. The stone was a lava rock thrown up by an actively erupting volcano.

After Johnny's death at the end of 1993, Zori's was moved to the home of Jackie and her mother Chrystal.  Here, Chrystal exhibits her paintings of wild-life and birds and her children's books while Jackie and her assistant, Martrina Zondi continue to design and make up gemstone jewellery.

While Jackie has a deep love for birds, wildlife, plants and animals, which led her to work as an entomologist and got her involved in eco-tourism in Zimbabwe, rocks remain her first love. This passion is currently fuelling the establishment of an 'Ancient Earth Exhibition'  which will be showcased at Zori's. The rocks and crystals to be displayed will portray Earth's Story, going back 3 thousand million years in geological history.

Jackie is also studying crystal healing with Sue and Simon Lily, highly respected therapist tutors from the UK. While Jackie balances all the aspects of running a home and business, studying, consulting with her clients and orchestrating the exciting launch of the Ancient Earth exhibition, we will do our best to contain our enthusiasm as we look forward to the opening of this intriguing Earth Story.