Mike's Story from the upcoming History of Winterskloof 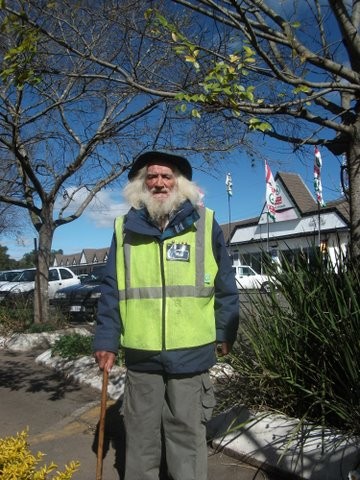 Has anyone in the Hilton Village KwikSpar area seen a weather beaten, white bearded, amiable, and very helpful car guard, dressed in a yellow fluorescent jacket, veldskoen and Stetson hat? We guess they have. If not, he has in the past been riding a battered old bicycle along Hilton Avenue and in earlier years with a young 'umfaan' perched on the crossbar?

As anyone might discern, Mike Landsman experienced a tough but fascinating life. In the 1930's he was brought up by his mother who was an Onderstepoort trained vet.

After completing school and being a keen animal lover, he  tried his hand at veterinary studies, but ended up doing five years in the South African Navy in Simons town. One group task he remembers was bringing one of South Africa's first French built submarines the SAS Jan van Riebeck on its maiden voyage to Cape Town.

After his time in the SAN he made an acquaintance with the legendary mercenary leader ' Michael Hoare, who lived for a short time during the 1980's in Hilton Avenue. He has many a story to tell about his awesome battles in what was previously known as 'The Congo'. For a period as a result of his love for horses he joined the South African Jockey Club and helped to look after race horses. After that he took to riding BSA motor bikes with fellow bikers around the countryside.

Having received a number of 'not so pleasant' experiences, Mike decided to move to Port Elizabeth and work as an engine mechanic on cargo boats. He also travelled to London where he stayed for a while and then to Australia where he amongst other jobs, helped to lay water pipelines to various stations in the 'outback'.

He is not shy to explain that somehow the immigration authorities caught up with him and he found himself deported and incarcerated for a time in Zonderwater Prison in Pretoria. He has strong views on the now outmoded 'death penalty', as from a distance' he viewed some gruesome scenes which took place during the Apartheid era.

During this time, after an early release, he married a warders' sister, but was heart-broken when she died ten years later. Losing contact with his sons, he later moved to a vacant plot in Winterskloof and lived by himself in a caravan with his beloved dogs for about 15 years, Readers of the Witness newspaper will remember how Mike was evicted from the property on account of the building of a new   housing development. With the assistance of a number of 'do- gooders' in particular his late friend and benefactor Karl Botha, he managed to get the loan of a small plot next to the Howick Airfield , where he now resides and loves taking 'rides' at week-ends with some of his glider friends! 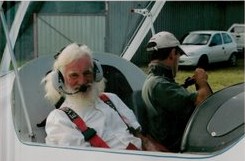 To prove his compassionate nature, Mike several years ago discovered a young single mother in a state pensioner queue who could no longer afford to keep her three month old infant. Mike, with a big heart, offered to take the child and bring him up as best possible, an awesome challenge to say the least.

This he has done under sometimes great financial difficulty, spending his entire pension on Byani's school fees at Primary School and then Newton Technical School where he has the dream of one day becoming a member of the South African Air Force! What an example to fellow South Africans!

A big Thank You to author, Chris Lake for sharing his interesting interview with Mike Landsman......watch this space for news of the updated Winterskloof history book!