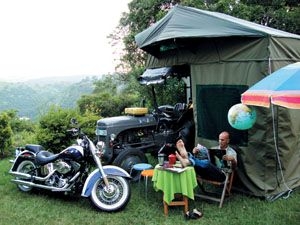 Tony Tractor is currently undertaking a journey around the world on his 1948 Ferguson Tractor towing a Harley Davidson and his roof tent. Some have cited his efforts amongst the most bizarre feats undertaken to gather support for a worthy cause. This tractor trek honors people whose lives have been altered by violence and rape.

He has previously journeyed across South Africa from Beitbridge to Cape Agulhas  raising R100 000 for the Midlands Crisis & Trauma Centre in Howick and also promoted awareness for the South African National Blood Services need for donations.

Tony was born in Canada, grew up on a farm outside Melbourne and migrated to South Africa in 2001. He can't remember a time when tractors were not part of his life. While messing about with engines as a child he figured out that tractors are pretty amazing machines, clearly able to handle almost anything.

This trip is expected to take seven years, cost R1,3 million and collect $1million for victims of violence and rape. It has been primarily self-funded with some sponsorship added. The planned route on this vintage Ferguson tractor will start in Howick and continue to Australia, New Zealand, South and Central America, the US, Canada, Russia, Mongolia and Western Europe.

Tractor Tony is motivated by the memory of injuries and trauma he personally suffered in an armed robbery, shortly after emigrating to SA nine years ago to set up his company, Spirit of Africa Taxidermy.  A meeting with Jes Foord, the well known rape survivor and vigorous warrior against violence and rape, further incited Tony to embark on this tour.

Encouraged by the public support, the man nicknamed Tony Tractor enlisted help to restore his tractor and had it fitted with a tent in preparation for this challenge. The Harley-Davidson is accompanying him to get him around stopping points with ease and he also anticipate that it will appeal to the millions of Harley fans around the world.

Tony believes passionately that his journey will achieve international awareness for victims of violence. He points out that Virgin founder Richard Branson achieved a lot without a great deal of education, and so trusts that can he achieve his goal, despite having dropped out of school at 15. He quotes his main inspiration as these words from American anthropologist Margaret Mead : Never doubt that a small group of thoughtful, committed citizens can change the world. Indeed, it is the only thing that ever has.