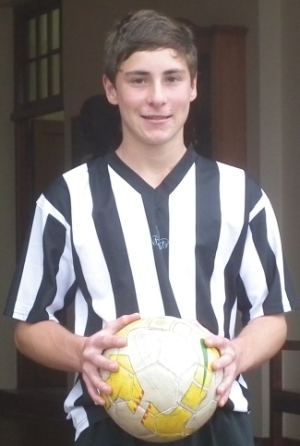 Congratulations to Chris Trenchard who has been selected for the u 14 KZN Soccer  team. This Grade 8 learner hails from Johannesburg and played provincial soccer for Gauteng while at junior school. Now he eagerly anticipates the first practice with an entirely new KZN team in Kloof on Sunday.

Soccer featured in Chris's life from the age of five and he really enjoys the teamwork aspect and has a lot of fun playing soccer. He practices three times a week and shared that he thinks it is important for younger children to get involved in club soccer as early as they can. While a variety of skills and fitness are important to his game, Chris believes his greatest strength as a defender is his ability to read the opponents next move.

This sporty all-rounder is going to take his soccer career as it comes for now, practising three times a week and maintaining a balance between academics and sport. In the long term he dreams of playing for an English premier league.

Chris supports Manchester United in the current premiership and his favourite soccer hero is Carlos Tevez. Spain was his choice to win the Fifa World Cup, their win and his own achievement has made 2010 a great soccer year for Chris. HiltonVillage.co.za wishes Chris well with his future in sport.