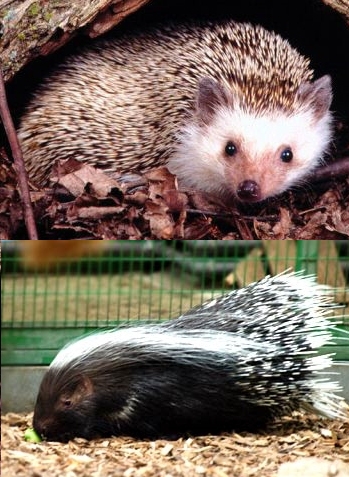 Hedgehogs and Porcupines, both found in South Africa share but one common feature, quills. Yet with these spikes covering the best part of their bodies they appear similar, until the porcupine outgrows the average hedgehog by almost 30 kilograms! Hedgehogs are small and weigh between 400 to 600 grams while the porcupine can weigh up to 30 kilograms. Hedgehogs are insectivores and porcupines are rodents. A Hedgehog's diet comprises mainly worms and insects on the ground while Porcupines are vegetarians eating plant material including leaves, bark, fruit, bulbs and roots. Porcupines also crave salt and if they find almost anything previously held in a human's sweaty hand they will destructively gnaw away in innocent bliss.

Porcupines may smack other animals in the face with their tails if they feel threatened. Their quills are designed to burrow in and a vet will have a tough time removing the barbs which naturally work their way deeper into the victim. The quills can cause a bad infection and injuries must be professionally treated. Porcupines are not aggressive unless their space is invaded. Shown respect they will tolerate being observed from a safe distance.

Hedgehogs adopt a more defensive behaviour when under attack. They simply roll up into a ball. They use a circular muscle that runs along the sides of their body and across the rump and neck which folds into a bag to encase the body, head and legs. Curled up in this manner with thousands of spikes aiming outwards, the Hedgehog can sleep peacefully.

Hedgehogs are most desirable garden inhabitants since they are skilled in controlling garden pests. A single hedgehog can keep an average garden free of pests as they gobble their way through up to 200 grams of insects nightly. In the United Kingdom environmentally conscious gardeners do their utmost to attract hedgehogs to their plots. They lay out suitable treats and cut hedgehog sized holes into their boundary fences to entice these little creatures in. Many a gardener who is challenged by the vegan appetite and tunneling habits of a Porcupine may understandably repeat the mantra 'may all of our porcupines be hedgehogs' on a daily basis.

Both Hedgehogs and Porcupines can be successfully owned as pets if you are comfortable with removing them from their natural habitat.