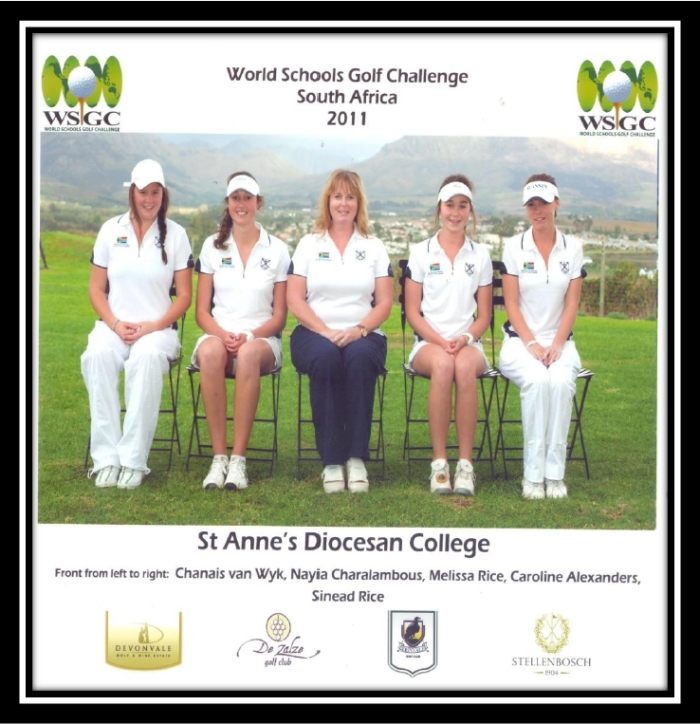 The 3rd World Schools Golf Challenge, held in Stellenbosch, South Africa - 46 teams representing 23 Schools and 7 countries took part in the Challenge to be played on the spectacular courses in and around Stellenbosch. A great mix of elite players, developing players and newcomers contested the Challenge to see if they could overtake top Schools from previous Challenge - Millfield School from England and Como Secondary College from Australia.

The opening ceremony held on Sunday the 24th April had all the 182 school children (16 girls) starting to introduce themselves to each other. We were staying at the Protea Hotel Stellenbosch so it gave the girls chance to make many new friends from as far afield as Australia and New Zealand.

The tournament started on Monday the 25th to a cold front that had just hit the Western Cape. So it was off to Erinvale at 6.30am to be there for our 1st tee off at 7.30am. Wow it was cold and the poor girls had to content with the hardest course we were to play on with pumping wind and glass-like greens. So there were long faces from all the girls when they ended the day, but as I said to them they had to remember this was the hardest course they will face in the tournament and this was the first time they had played in a Medal competition ' that is you count every shot until the ' white ball goes into the hole.

Well on Tuesday I woke up at 2am to the heavens opening and the rain did not stop. While driving them all in the car in the dark, heavy rain and cold to Devonvale golf course we were all convinced that the day would be cancelled. But no joy the girls tee'd off in heavy rain which then chose to go on and off most of the day and before we were all in it got windy and freezing cold. But the girls come in with some smiles as they had all improved on the previous day. Wednesday was a rest day and the girls spent time with family. Thursday looked so much better, nippy in the morning but the SUN was shining. So off to De Zalze we went. A beautiful golf course under the Stellenbosch mountains but poor drainage on the course, so I know the girls battled in getting their drives to go anywhere as there was no run. But their game was starting to get consistent and better rounds for all was the result.

Friday was to Stellenbosch Golf Club with the "promise" of good weather. Well that did not last the whole day and it was back to taking the umbrellas out, putting on the rain suits and trying to keep the hands and club grips dry. That went on and off all day. But a happy exhausted group came off the course having I am sure enjoyed the many moments, good and bad of the tournament.

Friday late afternoon we all caught the bus to the Prize giving evening held at Moyo – Spier. This turned out to be a very pleasant surprise for us. The tournament had started with 6 girls teams registered to play, but on the first day some girls from the other countries could not come so the Mixed team division grew by 5 teams and we were the only girls' team. Well that was not our fault - so I am happy to say that St Annes won the Girls Division, both Nett and Gross competition. A much appreciated gesture considering the hard work the girls put in to this very challenging tournament for all.

Saturday was a quick chance to say bye to friends made and then off the airport for all of us to return home and to St Annes with our 2 trophies and 2 medals each.

From the Team manager – a few grey hairs extra –