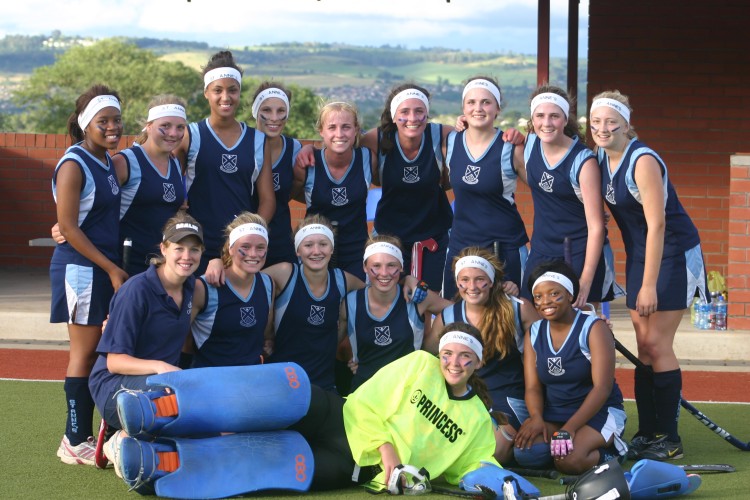 For Stephanie MacDonald of St Anne's, being picked as part of the 2012 Ladies' Hockey Olympic selection is the culmination of years of dedication, passion and hard work. Her spontaneous decision to volunteer as goalkeeper for the school u14 team in 2007, following in her father's hockey footsteps, was the catalyst for her taking up this position. What ensued has been a number of accolades within the sport, with her becoming a member of the Olympic team as the pinnacle.

Representing the St Anne's first team on tour to Singapore and a permanent member of this team since 2010, Stephanie also plays u18 Midlands Field Hockey, u19 KZN hockey and is part of the Zimbabwean u17 Olympic Qualifiers Team. She has also received full hockey colours twice, and plays indoor hockey, although she describes it as a completely different sport altogether. Her invitation on to the Olympic team stemmed from her participation in the Olympic Qualifying Tournament in East London, where she played first string goalie and obtained man of the match for the game against South Africa. As a direct result of this, she received an invitation to join the Zimbabwean National Women's Hockey Squad for the African Olympic Qualifiers.

Stephanie attributes a large portion of this achievement to her time at St Anne's. Her hockey career at the school has allowed her to play matches, both at home and on tour, within and against her own age group until she joined the first team in 2010. She makes mention of the unlimited support from numerous coaches, in particular Mrs Randall who recognised her potential and encouraged her parents to invest in her keeper kit. In addition to this, she has wonderful memories with team mates ' on and off the field ' and the school has always encouraged her to push the bounds of her personal best; helping through the hard times and fuelling her love for goalkeeping.

Balancing academics and her training programme is a commendable feat, but something she appears to have mastered in her Matric year. In addition to this, she plays three first team sports as well as being involved in other extra-curricular activities. However, she is managing a training programme that will thoroughly prepare her for what is to come. Playing sport for at least two hours a day, at least one hour of which is hockey, she also carefully monitors what she eats and does some exercises in her room prior to lessons in the morning. When she feels her fitness slipping, she runs in the afternoons. During the holidays, in addition to playing with the Squad, she plays with her brother who is a very talented field player.

Whilst still getting to know some of her Olympic team mates, Stephanie knows many of them from her time on the Junior Olympic Team, and has the added advantage of having her best friend from Zimbabwe on the team.

Although she would like to keep playing hockey forever, Stephanie understands the importance of a back-up plan, and is hopefully off to university in USA on a hockey scholarship, where she is looking at studying pre-med in the interests of becoming another of her passions ' a forensic pathologist.