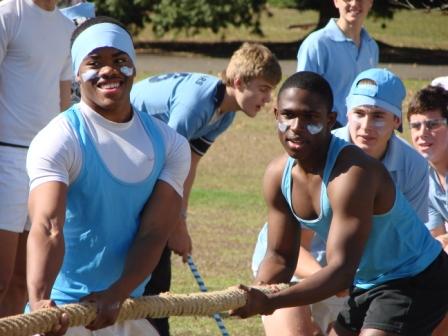 Hilton College decided that the school would celebrate June 16 in a novel and meaningful way . The programme began on Wednesday evening in the theatre with a variety concert entitled @Hilton has Talent'. Each House contributed an item and these varied from skits to a Mr Universe exhibition. The school boys were richly entertained and, since each event over the festival of youth was based on a point system, the winners were Falcon House and their representatives Nikitas Vontas and Michael Ryan who did a marvelously entertaining rendition of a school day at Hilton College.

June 16 began with the boys wearing civvies as part of a youth day charity event raising money for The Abandoned Children Foundation. James Robinson and Francois Kassier assisted by Kwadwo Adjepong-Boateng put on a superb commemorative power point presentation whose theme was Apathy. The tone, delivery and professionalism of the production was superb and illustrated the potential of our youth. After the first three periods, the school then participated in 15 events ranging from egg eating to a maths quiz and each boy was asked to participate in one event during the festival. There was a combination of intellectual and sport events which included the Inter House Cross Country and a new event the circular drive trolley race. The programme culminated on Gilfillan Field with House war cries.

The event will become an annual event celebrating youth and incorporating House and school spirit and a trophy the Youth Cup will be presented in Assembly at the end of term to the House which scored the most points over the whole event. The cultural representatives in each House under the steerage of Ant Durnford the Arts Heritage and Culture Director and Thabo Scott a matriculant were thrilled with the spirit and success of this inaugural event. The lunch for the school had an Asian theme and consisted of Bunny Chows on the front lawn to commemorate the 150th anniversary of the arrival of the Indians in South Africa.