Relax at MiTH after election day 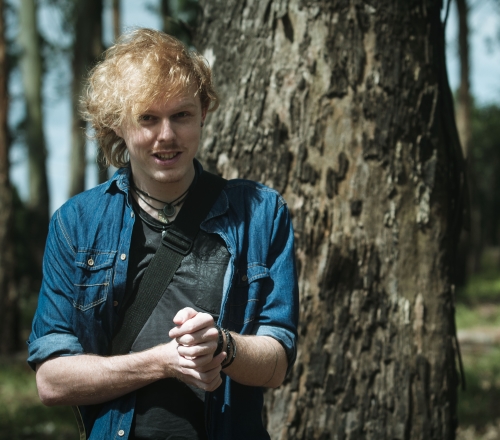 9pm Roarke Angelbright
Roarke Angelbright is an Alt-Folk artist with Singer-Songwriter roots, born and raised in Durban. This energetic young artist takes inspiration from folk, rock, blues, indie, grunge, and hip-hop and brings these influences into the context of a solo-acoustic artist. He uses a high standard of live-looping; bringing in stacks of vocal layers, guitar, percussion, basslines, beatboxing, singing, raps, and guitar solos to craft his sound. Accompanied by the talented Nat Bruzas on percussion to put together a full, raw and authentic performance - focused on original music and storytelling with some energetic covers thrown in.
Since Roarke's last appearance at MiTH (1 year ago), he's released his debut EP (Chaotic Neutral), opened up for Matthew Mole, his latest single (Wastelands) is currently playlisted on several radio stations nationwide and he's currently finishing off his first tour (fresh off the back of the Eastern Cape stretch).'
8pm Roly Struckmeyer
Having been a fixture on the music scene in KwaZulu-Natal since the late ’80s, Pietermaritzburg-born acoustic guitarist & vocalist Roly Struckmeyer started playing the guitar at age seven. His music career began when he returned from England in 1989 to form a band known as “House On The Hill.” During his career as a performer, Roly has toured & performed with names such as Wonderboom and Landscape Prayers. He has also played with a number of amazing bands such as Butternut, The Farryl Purkiss Band & Deluxe to name a few. In 1994, while in America, he played on the Free Stage at a festival in Boulder, Colorado, and was a member of Arapaho for the last year of their career. Roly worked with Syd Kitchen in the early 2000s, and with Perez from 2001. He's now joined the latter as an official band member. He did a solo album in 2007 and has spent the last ten or twelve years in cover bands - No Fly Zone, A-frame, and more recently Rustic Spring. Most recently he formed the original duo called Is it? with Michael Goddard from Perez and Steampunk Coffee South Africa. Roly performed his new material at Splashy Fen 2019 and is excited to be creating music and to be back at MiTH.
7pm Facade
A Façade is a deceptive outer appearance. That’s Façade; a group of five matric boys, who don’t study music but use it to escape their school lives. They aren’t genre-based, but are inspired by jazz, rock, folk, and indie. Composed of five multi-instrumentalists, Façade aims to create an experience rather than a performance. The band consists of Simon Browse on drums, Richard Taylor on guitar and trumpet, James Dawson on vocals, keyboard and guitar, Richard Officer on guitar and sax, and Kombo Magara on vocals, bass, and guitar.
ABOUT MiTH:
MiTH is located at The Knoll Historic Guest Farm, Knoll Drive, Hilton. Doors open at 6 pm and the music will kick off at 7 pm. Entrance is R40 at the door.
MiTH is a semi-open mic music club. An opportunity for musicians to share the joy of their music with a friendly audience which includes fellow musicians – who have all “been there” too. (Non-musicians welcome too!) Whether you’re a newbie looking for your first opportunity to perform publicly, or a more experienced/mature musician simply looking for people who are as passionate about music as you are – come along and join us!
Bring your own booze. Food and soft drinks are available for sale. Musicians who want to play at MiTH, please contact This email address is being protected from spambots. You need JavaScript enabled to view it..
DIRECTIONS TO MiTH:
Take the N3 to Hilton, take the Hilton turnoff and go South into the Village (away from Hilton College). Travel 5,2km along Hilton Avenue (past two sets of traffic lights and Crossways Pub) and keep going straight as Hilton Avenue turns into Dennis Shepstone Drive. At the 5,2km mark, Knoll Drive will be on your right – the entrance to MiTH is the *second* entrance on your left into The Knoll Historic Guest Farm.
Visit www.mith.co.za for more details and directions.