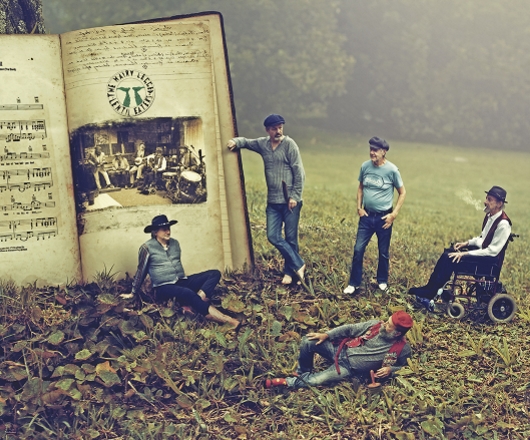 Variously described as a “collective multiple personality disorder” and “the most eclectic folk band this side of the Limpopo”, the Hairy Legged Lentil Eaters are closing the book on 28 years of fun, comradeship and musical mayhem.

The band’s nexus was probably the small stage at the Polo Tavern in Pietermaritzburg, at the beginning of the 1980’s - a stage that supported budding musicians, including guitarist, Brian Bedingfield, who met singer, Huyton Watts, triggering an enduring musical partnership. Chris Bester remembers those early days as a young student, describing how liberating it was to his strict classical roots, that the Polo Tavern stage could be so forgiving of such unpolished musicians who were clearly enjoying themselves. Durban-born rocker, Barry Meintjes, had also become a Polo’s regular with his mate, Gerry Haughey.

Fast forward to 1991. Brian and Huyton were re-connecting after being away for a while, and starting to make music together again, as the good Lord intended. Remembering them from those early Polo’s days, Chris joined them on violin, but was quickly usurped by violinist extraordinaire, Mark Schönau, who brought along his friend, bassist Sidwell Snyers - setting Chris on a lifelong quest to find another instrument to call his own. To this day, he continues to pick his way through a smorgasbord of guitar, keyboards, mandolin, double bass, recorder, trombone, pedal steel and dobro. Thus was born the Hairy Legged Lentil Eaters. “The hairy what?” I hear you ask. Well, dear reader, read on.

Unconstrained by convention, these five very different individuals (accountant, environmental activist, soil scientist, history teacher, missionary) found each other at a time of great change. It was the early 90’s and things were never going to be the same again, including the making of music. But talk came first, music second - grist to the mill of Brian’s wife, Dee, who presided over smoky, wine-soaked dinner tables with a keen nose for a good debate. Heated discussions led on to many a late night musical spree which had, as their staple, a thumbing of collective noses at all things holy: cows and catholics; sacred and profane. A certain Hairies signature was developing - satirical, comedic and downright crazy at times.

On one such evening, the debate turned to a name for the band. Memories vary as to its origin, but wine-fuelled hilarity finally threw a particularly barmy name into the mix: The Hairy Legged Lentil Eaters. Needing sleep, they decided for a lark to adopt that name for one performance only, but it stuck. The name got into the newspapers, Huyton designed a logo, and the rest is history.

By 1994, Sidwell had left for the UK, to be replaced by Barry Meintjes (Mr Fix-It) on bass, who quickly assumed the father role in the band. Barry brought along his drummer friend, Gordon Deeves, who was followed later by Robbie Marais, and then most recently, Maritzburg’s Mr Solid, Chris Palframan. Mark left the band some years back on a long sabbatical.

From its very beginnings, the band has performed regularly at KZN’s premier music festival, Splashy Fen, as well as other smaller festivals: Hilton Arts, Southern Cross, White Mountain and Baynesfield’s Poets Porch. And the weirdest gig of them all - entertaining a Saudi sheikh in the Seychelles.

The Hairies are far more than a band - they are a movement. A movement which has influenced, and been influenced by, a new South African musical culture. They have moved on from their “Folk” beginnings but have not lost any of the soul. They are funny, quirky and reliably irreverent - but what shone most brightly for audiences through all their 28 years was the sheer joy evident in the way they make music together. Along their journey, the Hairies have been privileged to have some of the country’s finest musicians perform with them, and the final concert will feature three of the best of them: guitarist Angus Burns, violinist Anton Cawthorn-Blazeby, and guitarist Rusty Red.
Source MiTH facebook.