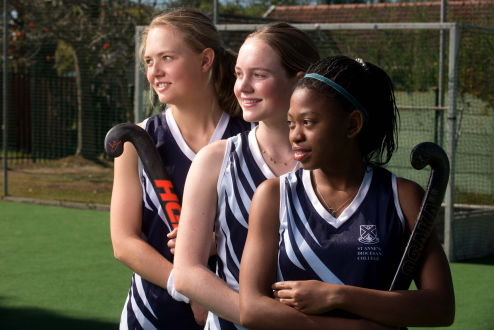 SPAR KZN Schoolgirls’ Hockey Challenge
Pietermaritzburg Central and Northern Regionals
St Anne’s College: Saturday 14 March
St Anne’s College plays host to the upcoming SPAR KZN Schoolgirls’ Hockey Challenge this coming weekend, whereby both the Pietermaritzburg Central and Northern Regionals will be played on their two astro turfs.
With home turf advantage, host school St Anne’s College will hope that they can continue their dominance in the Pietermaritzburg Northern Regional. They will take on Howick High School, Treverton, Grace College, Voortrekker High School and The Wykeham Collegiate. The games will all be 25 minutes one way running time.
Across the way defending champions, Epworth School will be keen to take their third title in the Pietermaritzburg Central Regional. They will meet Alexander High, Pietermaritzburg Girls’ High School, St John’s D.S.G., Maritzburg Christian School and Carter High School. The games will be 20 minutes one way running time.
Both regionals will have a round robin format. The Pietermaritzburg Northern’s top two teams will face each other on in their regional final at 2.40pm. Ten minutes later the top two teams will take to their turf to duel it out for the honours in the Pietermaritzburg Central Regional.
Only two teams have represented the northern region of Pietermaritzburg at the Grand Finals. St Anne’s have raised the trophy eight times and The Wykeham Collegiate had their name engraved on the trophy in 2012. Three teams have travelled to Durban in July. Pietermaritzburg Girls’ High dominated the area for six times, with St John’s winning once, and Epworth hunting their third title this weekend.
Both tournaments will award 4 points for a win, a draw with goals will earn 2 points and a goalless draw only 1 point. A loss will be logged as zero points for the losing team.
The two teams to win will join three teams that have already earned a spot at the Grand Finals that will take place in July at St Marys DSG. The first team to secure a spot is newcomers from Vryheid, Hoërskool Pionier from the Northern KZN Regional. Second team that will make an appearance at the Grand Finals for a tenth time is Durban Girls’ College representing the Durban Central Regional. The third team, back again after a year’s gap is Our Lady of Fatima from the Durban North Regional.
For more info like the tournament’s Facebook page or follow on Instagram.
Pictured here: Eyes on the prize, St Anne’s Lusanda Mtshali, Erin Armstrong and Sarah Church are focused on defending their team's title ahead of the Pietermaritzburg Northern Regional of the SPAR KZN Schoolgirls’ Hockey Challenge that takes place on Saturday at St Anne’s College.
News supplied.