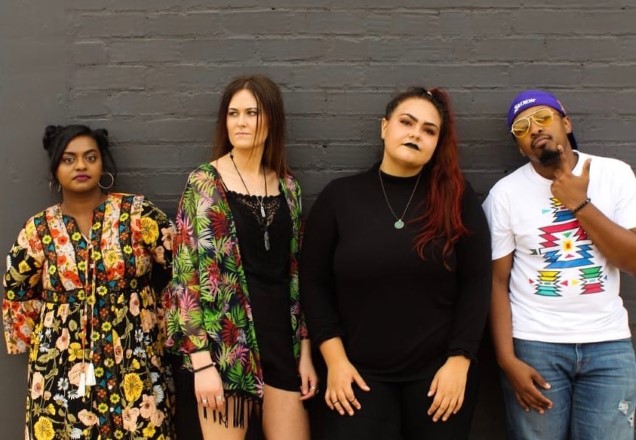 Kindly note that in light of gatherings of 100 or more being banned to reduce the spread of COVID-19 in SA, MiTH is closed until further notice - effective 15 March 2020.

KNOW BEFORE YOU GO
MiTH takes place every second Wednesday at The Knoll Historic Guest Farm, Knoll Drive, Hilton. R50 (cash only) at the door. Doors open at 6pm and the music kicks off at 7pm. Catering: Bring your own drinks. Food available for sale. The venue is enclosed and seating is available. Arrive early for good parking and seats!

KRISTEN KONING BAND
The Kristen Koning Band is an alternative folk band that formed in the KZN Midlands in June 2019. The band is composed of Kristen Koning on lead vocals and rhythm guitar, Skippy Khubeka on lead guitar, Dev van Rooyen on bass, and Nerissa Pillay on back-up vocals. They perform original music written by Kristen, as well as covers, in Afrikaans and English, gaining inspiration from artists like Mumford and Sons, Arctic Fire, Tame Impala, and Kings of Leon.

The band’s debut performance at The Valley Open Mic, Crossways, was received warmly by an audience of supporters and fellow musicians. They are currently taking part in the Liberty Midlands Mall Battle of the Bands, and will be performing at the mall on the 3rd of August 2019. Their next performance is at Music in the Hills on 31 July at the Knoll Guest House, Hilton.

The Reid Family Band has been years in the making, jamming together since the kids were small. Vincent Reid has had an interest in music from a young age and is mainly self-taught. He plays keyboard, guitar and recently tin whistle. Rhiannon has just finished matric and with the help of Kech Sanchez, she has honed her skills on guitar and sings lead vocals. Younger brother Aidan showed musical abilities from the time he was knee-high and also sings. Tess organises the bookings and joins in on vocals and percussion, when possible. The Reid Family Band enjoys many different genres of music but is particularly influenced by Irish, Folk and Pop music.

During the day, Ilan Lax is a legal professional consulting on human rights, environmental, land and development law; governance and organisational development and working as an adjudication specialist. But Ilan's other persona is a soulful, poetic musician who performs folk-rock, including ballads and original material, with deep emotion. His natural charm and obvious musical talent make him a pleasure to listen to.

Arguably the KZN Midlands' best-loved music venue, Music in The Hills (MiTH) is an opportunity for beginners, professionals and passionate music fans to share the joy of music at The Knoll Historic Guest Farm. Visit www.mith.co.za for more details and directions. Musicians can contact This email address is being protected from spambots. You need JavaScript enabled to view it. for slots.

Take the N3 to Hilton, take the Hilton turnoff and go South into the Village (away from Hilton College). Travel 5,2km along Hilton Avenue (past two sets of traffic lights and Crossways Pub) and keep going straight as Hilton Avenue turns into Dennis Shepstone Drive. At the 5,2km mark, Knoll Drive will be on your right – the entrance to MiTH is the *second* entrance on your left into The Knoll Historic Guest Farm.