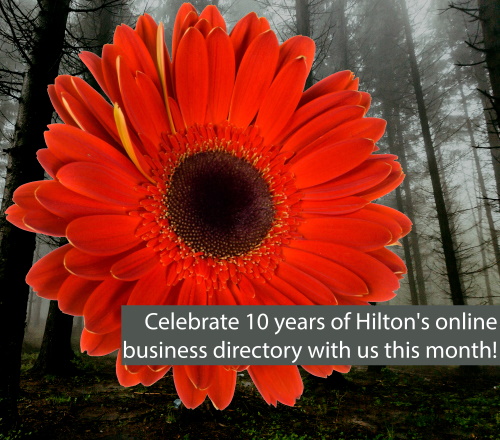 Reflecting on ten years of HiltonVillage.co.za gratitude is at the top of my list. Thank you to the courageous early adopters who believed in the grit and passion I had to move ahead with the concept of an online space where Hilton businesses could be easily found and thereby encourage support for one another. As I write I am seated at the same round table at which all the early dreams were seeded, some realised and some still to come. Growth was a result of listening to my client’s needs and responding as best I could. Our unique browser count grew from around 400 to 500 in month one and has reached heights of 16,875 (or 1,319,690 hits if you prefer) in a single month.
Off-shoots from the original plan began to sprout; Hilton Covered, Hilton’s Posh Car Boot Sale, Hilton's Posh Market, networking events, HowickVillage.co.za and Howick Covered followed. During the growth of these micro-brands, it became increasingly difficult to answer the phone as we attempted to identify all the little entities of which we were now comprised, the response at times sounded like Wikipedia on Audible! Thus, the umbrella brand VillageMedia was born and we could once more answer calls with just a couple of words.
A special mention of thanks is due to the following clients who have been online since the very first quarter of year one to date; Hilton Pre-Primary School, Ronnoco Nursery, ASP Services, Harcourts Hilton, Pam Golding Properties, St Anne’s Diocesan College, Cowan House, Cherri Forsyth Coaching, JG Africa, Umgeni Veterinary Clinic, Laddsworth Primary School, Hilton College, Business Soul Accounting, Tanglewood Nursery, Capulum College, Zori's and Tasha's Fantastic Fudge. To the rest of our 'village of supporters', including our valued browsers, you are all awesome and your role in this little tribe of like-minded humans is appreciated.
As an expression of my continuing excitement for these little local brands and especially HiltonVillage.co.za whose 10th birthday deserves a celebration, I have decided to have some fun giving back.
The first TEN businesses to sign up online during September 2020 will receive 2010 rates for their entire first year online with HiltonVillage.co.za AND at the end of September ONE of these 10 new advertisers will get the package they chose FREE for the entire year!
Happy spring, I look forward to nurturing relationships with new advertisers during this exciting month of celebration!