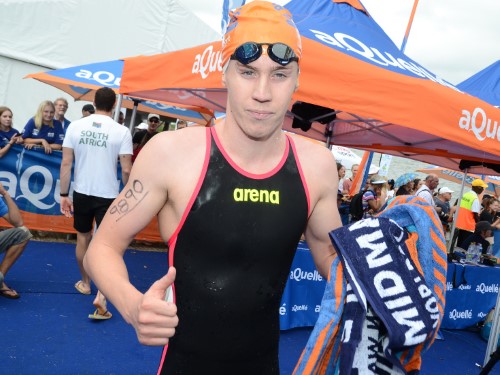 Defending aQuellé Midmar Mile men’s champion Michael McGlynn admits the pressure will be on, but he is relishing the opportunity to race again when the event takes place under very different circumstances in 2021.
Last year proved to be something of a breakthrough event for the Durban swimmer as he powered past seven-time champion Chad Ho for victory.
This year, the aQuellé Midmar Mile is taking place over two consecutive weekends, 6-7 March and 13-14 March, in order to make it safer for all swimmers taking part. McGlynn will be part of a 20-strong field in a specially arranged elite event on 7 March, fighting for the title once again.
As for all swimmers, it hasn’t been the easiest of build-ups for the 21-year-old, who also has a spot on the SA team to the Tokyo Olympics in his sights.
“Last year I half qualified for the 2020 Olympics in the 10km open water swim and I couldn’t get to the final round of qualifiers. It was tough because I came off such a high and went straight into a lockdown,” explained McGlynn.
That meant trying to train in gym and school pools for a protracted period of time.
“I had to stay in Pretoria for November just to train in a 50m pool. Then I travelled back to Durban for December to race any race possible because I hadn’t done much training. To top it off I swim distance freestyle, so it became a snowball effect,” he added.
Heading into the aQuellé Midmar Mile as defending champion, McGlynn is hoping he’s done enough.
“I think it adds more pressure but I’m happy to be in this race again. Midmar is always that first breakout swim of the year and where I broke through, so hopefully I can bounce back.”
Looking back on his 2020 victory, McGlynn added: “It was crazy. I remember getting to the front of the pack and leading. I had this realisation of ‘it’s me’, because I had never led a Midmar before.”
A good showing on 7 March will go a long way to boosting McGlynn’s confidence heading into Olympic qualifiers. He’ll need to finish top two in the national open water championships and then top nine at the next global qualifying event in order to make the team to Tokyo. He’s also gunning for a qualifying time and a top two position in the 800m freestyle in the pool.
But for now, the focus is on regaining his fitness and form and defending that Midmar title.
“This time I know what I want and I know what I’m fighting for this time around as I’ve gained a lot more experience,” he reckons.
The 2021 two-weekend aQuellé Midmar Mile will be different from usual with organisers putting plenty of measures in place to ensure a safe and Covid-compliant event. Among these measures is the fact that there will be no mass starts as is usually the case. There will instead be rolling starts with each swimmer’s time being recorded from when they cross the start mat to when they reach the finish. This means no swimmers will congregate at the start or be in close contact with each other. There will also be no spectators.
Thanks to event partners North Safety, swimmers will be issued with a disposable mask at registration, which they will wear to the water’s edge and then dispose of before swimming. They will then be handed another mask to put on immediately on leaving the water at the finish.
For more information on the aQuellé Midmar Mile, head to www.midmarmile.co.za or anyone with queries about their entry can contact the race office on 0861 643627 or email This email address is being protected from spambots. You need JavaScript enabled to view it..
Photo credit: Action Photo SA
News supplied.