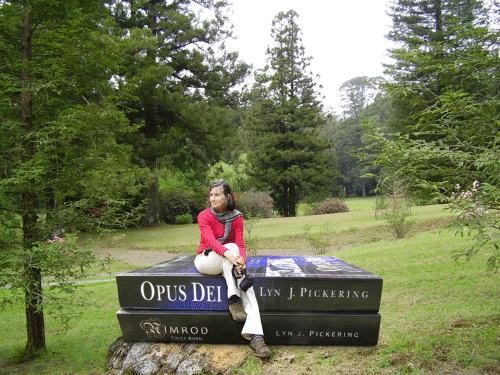 Two overland trips and a war launched me into writing.
My brother joined me in London intending to study art but I had met a Lebanese girl in my Earls Court bedsit and said, “Let’s go to Lebanon,” so we did.
Traveling overland was more interesting in those days. On the one hand, there were the inevitable border controls, on the other, forward planning was hardly necessary.
My poetry writing extended into an introspection of emotions intermingled with a rambling travelogue. In the six months, I was there, Lebanon was a daily adventure. I headed back to London alone, arriving with 50p to my name, but fortunately not without friends.
The second overlander was a 3 month trip from London to Cape Town with four guys in a long wheel based Land Rover. My role was chief cook and bottle-washer. Over the rough terrain, my writing, almost indecipherable, became an anchor and an outlet.
Civil war broke out in Lebanon not long after I married and settled in Westville, and the sadness I felt became the catalyst for a first book. So, between raising a family, I wrote three books. The first, a type-written main copy of The Single Leaf was lost in the post somewhere between SA and Lebanon, but the ending became the intro to Opus Dei.
Opus Dei and Nimrod Twice Born are both big books developed concurrently over a long period of time. My research at that stage (without cell-phones or WiFi) was often in the library, or on foot with a baby and toddler in tow. It took me to places such as the Bomb Squad in Durban where I was shown gory pictures of death and destruction and warned that if the building I was writing about was ever blown up, they had my number!
I’ve since written Betrayal of Fools and, recently, Sounding the Seventh Trumpet – which is a study of Biblical prophecy regarding the days in which we live.
Although Opus Dei was published in 2011, it is still incredibly pertinent today. The ebook has been updated but the original is still online on Amazon. I have a few copies available, if anyone is interested This email address is being protected from spambots. You need JavaScript enabled to view it..
All my books can be found on Amazon in the link below. Nimrod Twice Born and Opus Dei are both also available on the same link in three parts:
https://www.amazon.com/Lyn-J-Pickering/e/B009C8X4ZY
The Universal URL for Opus Dei is:
https://books2read.com/u/49lKPW
Betrayal of Fools will be back on stream soon in a new edition.
Sounding the Seventh Trumpet:
https://books2read.com/u/m0w9Ry
News supplied by Hilton based author, Lyn J Pickering.