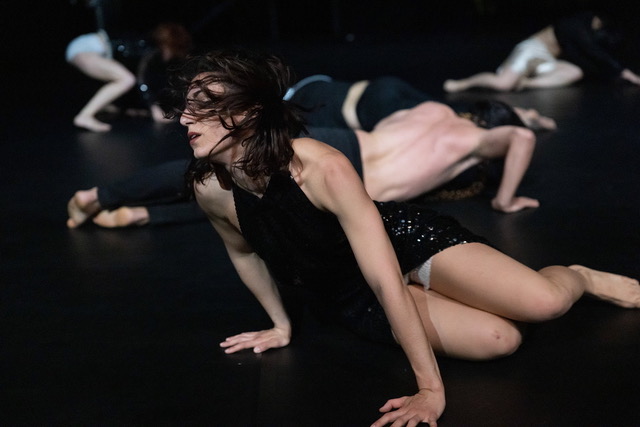 Five iconic European and American dance companies will be showcased in the 23rd JOMBA! Contemporary Dance Experience, presented by the University of KwaZulu-Natal’s Centre for Creative Arts online from 24 August to 5 September 2021.

The historic New York based Limón Dance Company, UK’s ACE music and dance, Germany’s Hannah Ma, Sweden’s Cullberg, and Spain’s Aïda Colmenero Dïaz will feature in the JOMBA! European and American Crossings Platform.
The UK, Birmingham based ACE music and dance, which celebrates a long history of connections with South Africa, have come to JOMBA! presenting one of their signature works TEN directed by Gail and Ian Parmel and choreographed by José Agudo. Full of intense physical power and human fragility, TEN explores the concepts of moving away and leaving, looking at how and why people choose imagined destinies over the lives they always thought they'd live. Inspired by global migration, TEN is a visceral and exhilarating dance production combining contemporary dance with an essence of Flamenco, Kathak, Martial Arts and ACE's inimitable Afro-fusion style. (Wednesday, 25 August at 7pm)
The historic New York based Limón Dance Company who will showcase two dances by José Limón which are considered among the 20th Century’s greatest works of modern choreography presented, alongside a contemporary new piece Suite Donuts by emerging choreographer, Chafin Seymour. Artistic director to this historic American company, Dante Puleio, says that “the pairing of these works now seems fortuitous. Recent political events which have further raised awareness of social consciousness and racial justice make this group of dances all the more important today”. The company presents: Suite Donuts (2020) by Chafin Seymour, The Moor’s Pavane (1949), and There is a Time (1956), both by José Limón. (Friday, 27 August at 7pm)
Sweden’s Cullberg - in collaboration with Norrlandsoperan – will present a remarkable screen dance film On Earth I’m Done choreographed by Jefta van Dinther and performed by Suelem de Oliveira da Silva. In the archaic-futuristic diptych On Earth I’m Done, the audience is transported to a place torn out of the conventional space-time continuum. The first part of the diptych (which JOMBA! audience will be watching) Mountains, is a solo and is directed for film by Simon Flack.
Choreographer van Dinther says, “I try and tackle the question of how to be and stay in love with our ever-changing world. Through an expulsion of words, both familiar and foreign, the performer on stage acts as a conduit, lamenting on behalf of others. Her being unravels in the connection between the physical, biological and anthropological; between and desire - it is a race for survival!” (Wednesday, 1 September at 7pm)
Hannah Ma (hannahmadance), a German-Chinese choreographer born in Berchtesgaden, Bavaria with her award-winning dance focus that lies on contemporary rituals and the translation of archaic roots within our society also features on this platform. She presents ONDA - into the unknown, a collaboration with Sebastian M. Purfürst from LEM-studios in Berlin. ONDA is magnificent research type performance and art space production, curiously discussing the relationship of humans and nature against the background of anthropocentrism. Ma explains that her work is a “visual dance engagement with how do we define the ‘non- reproducible magical soul’, the aura, the prehistoric part in every individual, the meaning of love in this modern, digitalised and globalised society”. Her work, which crosses the divide between live and digital dance installations, has won numerous European dance awards. (Friday, 3 September at 7pm)
She Poems (Spain) is set to be the illustrious closing night film of the festival. The festival hosts Spanish dancer/choreographer Aïda Colemenero Dïaz who has made a series of beautiful short screen dance films called She Poems made during her on-going travels in Africa.
She Poems is Dïaz’s project, inspired by poems written by women, created and produced on the African continent by a new generation of female performing arts creators. Begun in 2013, and still on-going She Poems has produced 20 dance short films, 6 contemporary dance pieces and a photographic series of visual beauty and power. The creators of She Poems are unique and pioneering artists who, from their particular and varied African geographical, cultural and personal context, engage in intimate creative processes to transform a poetic score into body and audiovisual language, using performative codes that originate from their immediate daily environment, their heritage and their own creative impulse.
Aïda Colmenero Dïaz is an artist, actress, choreographer, dancer, filmmaker and a performing arts curator born in Madrid of Galician descent. Aïda is a leading artist in Spain thanks to her avant-garde career, which has led her to explore unusual regions of the world and to embark on unique creative processes, crossing borders and providing a complex and alternative reflection on identity and cultural heritage. Through her work, marked by her multidisciplinary creative capacity, she aims to connect minds, build geographical and cultural bridges, and recover historical memory. (Sunday, 5 September at 7pm)
The festival can be access FREE online here: https://bit.ly/WatchJomba