Athletes Mahlangu and Schoenmaker the Stars of the Gauteng Sports Awards 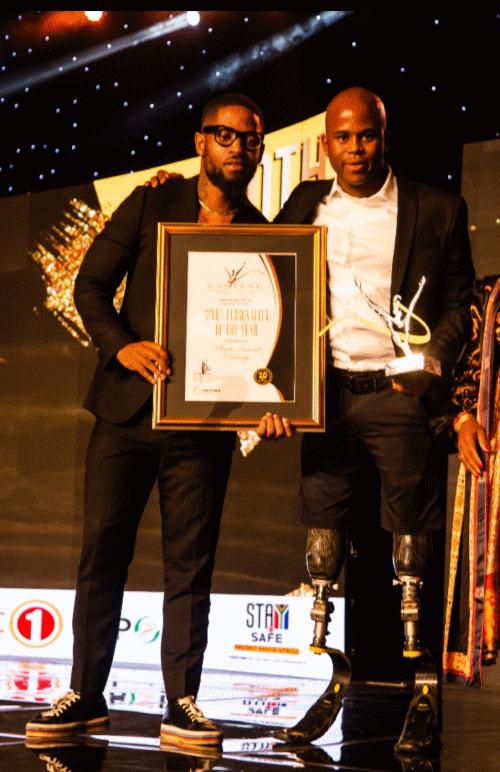 On Saturday, 13 November Matric student, Ntando Innocent Mahlangu bagged the Disabled Sportsman of the Year and the Sports Personality of the Year award, at a glittering awards ceremony while queen of the pool, Tatjana Schoenmaker was crowned Sportswoman of the Year.

Following a hiatus in 2020 due to the Covid-19 pandemic that rocked the world and put many people into very challenging situations, it was with a smile on her face that Gauteng Sport, Arts, Culture and Recreation MEC, Mbali Hlophe hosted the finalists at the blazing awards ceremony.

“We wish to congratulate all winners and finalists of this year's Gauteng Sport Awards”, MEC Mbali Hlophe. “The last 20 or so months have been difficult for all in the sporting industry, especially the athletes and those who help them train. Therefore it has been a big pleasure and indeed a privilege to once again be able to reward our stars of today and tomorrow. Athletes are inspirational and make a big difference in uplifting society and for that they need to be recognised and rewarded. We hope that tonight's awards have been able to go some way in making up for the last 18 months of challenge and hardship. Know that your efforts as athletes, coaches and administrators do not go unnoticed and for that we are grateful.

Congratulations to all who were nominated and all who have received awards. We hope that tonight will have inspired a new generation of sports women and men.

Mahlangu cleans up at Gauteng Sports Awards
Mahlangu was the obvious choice as Disabled Sportsman of the Year having won Gold at the Paralympic Games in Tokyo this year. The double amputee won the 200m in the T61 category, clocking 23.59sec, only slightly off his own world record of 22.92sec set in Gqeberha in April this year. The 200m Gold Medal was a fitting end to the Games for Mahlangu after having won the Long Jump competition with a world record leap of 7.17m.

Mahlangu’s inspirational story also caught the attention of the South African public who voted in their numbers that the 19-year-old Mahlangu earned the title of Sports Personality of the Year. At the age of 10, in 2012, the decision was made to have the operation after Mahlangu had spent most of his life to that point in a wheelchair. At birth he had been diagnosed with fibular hemi-melia; a congenital condition that affected both his legs from the knee down. Children who have fibular hemimelia are born with a short or missing fibula (one of the two bones in the lower leg).

Schoenmaker stunned the world when she swam 2:20.17 for the 200m breaststroke in Durban at the SSA Swimming Grand Prix in April to post the fastest time in the world before heading into the Olympics. If ever there were any doubts that she was more than just a medal contender, then that time laid those to rest very quickly.

It also came as no surprise then, that her coach, Rocco Meiring was handed the Coach of the year award.

Lifetime of the Year Award goes to the Slashing Tiger
Every year, the Gauteng Sports Awards recognises an athlete, a coach, an administrator or an individual who has made a big impact in people's lives through sport. In 2021 the Lifetime of the Year Award was bestowed upon Johannes “Slashing Tiger” Sithembe who, through Sport, was able to avoid a life of gangsterism and crime.

Sithembe joined the gym at the age of 19 to avoid the scourge of gangsterism in his neighbourhood. After turning professional in 1966 Sithembe promptly was crowned Transvaal Flyweight Champion. What followed was a lucrative and successful professional career with a World Title shot in 1974.

After suffering an injury to his eye, a detached retina, Sithembe was forced into retirement.

Moss makes merry
Morgan Moss was crowned Sportsman of the Year ahead of Miranda Malaika and Proteas Cricket Captain, Temba Bavuma. Moss made it to the round of 32 at the 2021 Karate Olympic Qualifying tournament in Paris, France in June this year.

Reigning SA Champion in the 57kg division, boxer Miranda Malajika was runner up in the category, with Bavuma, surprisingly finishing third.

Montjane, takes Disability Sportswoman title
There were no surprises that Kgothatso Montjane was voted as Sportswoman of the Year in the Disabled Sports Category.

Montjane has long been flying the flag for South Africa in wheelchair tennis and in 2018 she became the first black South African woman to compete at Wimbledon. 2021 was a phenomenal year for the 35-year-old, making the finals of Wimbledon in both the singles and doubles. She also progressed to the semi-finals of the other three Grand Slam tournaments, the Australian Open, the French Open and the US Open in the singles tournament.

MEC Hlophe went on to thank the winners and nominees for their courageous efforts in trying times. “There have certainly been some incredible performances from her feats in the pool that saw Tatiana Schoenmaker come back with two Medals and a World Record at the Olympic Games in Tokyo. To the evergreen KG Montjane who flies the flag very high on the international tennis circuit. We thank all of you for your efforts, dedication and the inspiration you have provided. Long may it continue and we wish you the very best for the future.”

The evening was wrapped up in stunning performances all round from the show hosts, Andile Ncube & Xoli Ngcobo to the artists including Oskido, Young Stunna, Kabza and Maphorisa, AKA, Costa Tich, Brenda Mtambo as well as Kamo Mphela and a troupe of dancers choreographed by Lee-che “Litchi” Janecke who dazzled the crowd.