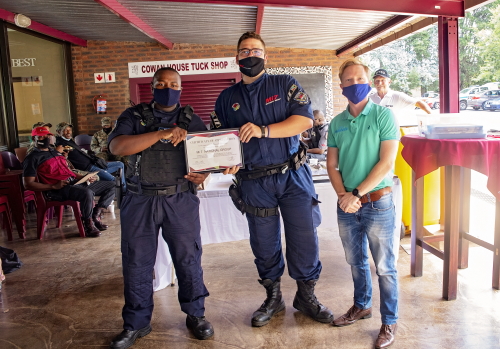 A lunchtime braai, arranged by the Hilton Community Neighbourhood Watch (HCNW) was held on 11th December at Cowan House in appreciation of the sterling work carried out by HCNW members, who have gone far beyond the call of duty in reducing crime in Hilton.

The HCNW was established in mid-2019 by members of Hilton SAPS and the Community, to counter rising crime in Hilton. The HCNW then established the Hilton Rapid Response (HRR) unit which comprises Hilton SAPS, volunteer members of the Community and most of the Armed Response Security companies operating in Hilton, who volunteer their services and time free to the HRR.

Certificates were also awarded to Mi 7 Emergency Medical Service (EMS), Midlands EMS and St Michael’s Ambulance Service for their volunteer services.
Every member of the HRR was also given a small gift as a token of appreciation.

The successes achieved by the HCNW and HRR are directly attributed to members of Hilton SAPS who lead and guide the process, followed by the Armed Response Security companies, emergency medical services and active members of the community.

This initiative is supported and appreciated by the Hilton Community.

Photograph below; Most of the Armed response members of the HRR