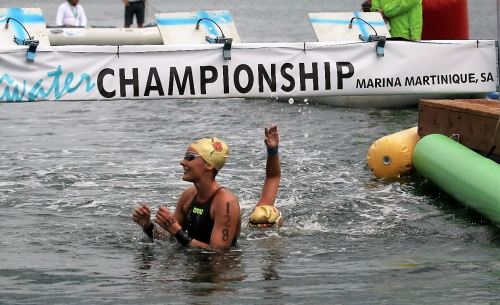 The women’s 10km race kicked things off at the SA Open Water Championships at Marina Martinique in the Eastern Cape on Friday with TUKS swimmer Amica de Jager emerging as the new national champion.

The 22-year-old took the race out hard and then settled into her rhythm. Eventually it came down to a pack of three Pretoria swimmers on the eighth and final lap, with De Jager powering ahead in the final 100m to edge out her teammates Catherine van Rensburg and Stephanie Houtman.

“I took it out and I felt like it was quite hard in the beginning but then it definitely slowed down and we were all in a pack,” said an elated De Jager afterwards.

“It was hectic. There were six or maybe seven or eight and everyone was just swimming next to each other so it was quite rough for a couple of laps. But we just hung in there and at the end we managed to break away. It’s great sharing the podium with my teammates,” she added.

“I knew it was going to come down to a sprint, so I was just making sure I had enough left in the tank for that sprint.

“The whole race, I wanted it so bad… I couldn’t believe it on the last lap. I was like hey, I’ve actually got a chance here, so it was awesome.”

In finishing in the top two, De Jager has ensured she’s in the running for selection to compete at the World Swimming Championships in Budapest at the end of June.

“It’s absolutely incredible. It’s one of my ultimate goals to go to world champs so that would be incredible,” she said of the prospect.

“I love what I’m doing and I love open water swimming so my goal is to do my best, have an amazing swim and enjoy it and that’s exactly what I did, so I love it.”

Meanwhile, part of the same event were the swimmers aged 16-17 who were contesting the 7.5km race with qualification for the World Junior Championships in the Seychelles this September on the line.

It was Hannah Neilson who took the win in 1:36.54, with Mykae Forrest second – only by a few split seconds – and Callan Lotter third.

“The first two laps were quite hard but knowing that I had my teammates backing me was quite a motivation, also my coach… As soon as I heard his voice I knew I had to finish for him because that’s all I want to do is make him proud,” she said.

As for the chance to represent the country at the World Junior Championships, Neilson added: “I’m ecstatic. Just to think that my coach has faith in me to do that, I was insanely excited. It hasn’t even sunk in yet but I’m very excited.”

Open water action continues on Saturday with the men’s 10km and 7.5km and women’s 3km events as well as the 4 x 1.25km mixed relay.

All the racing can be followed live via the following streaming link: http://swimsa.org/news/sa-open-water-swimming-championships-2022