Breytenbach lands national title in his first ever 10km race 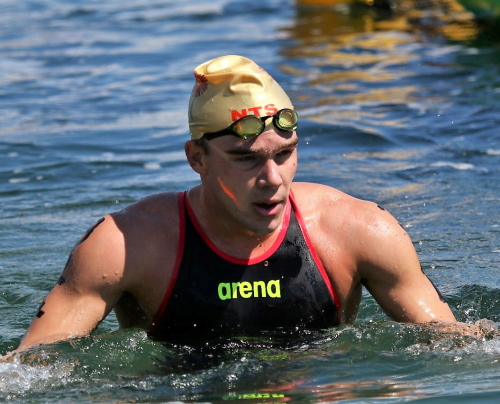 Fresh from claiming two golds in the pool at the SA Grand Prix meet in Durban just a few weeks ago, Pretoria swimmer Ruan Breytenbach competed in his first 10km open water swim on Saturday and walked away as the new national champion.

Breytenbach has swum 3km and 5km events in the past, but this was his first attempt at the longer, Olympic distance and it paid off. The 19-year-old outduelled Connor Buck in the last lap of the SA Open Water Championships at Marina Martinique, putting in a final sprint to finish in 1 hour 58 minutes and 14.85 seconds with Buck second in 1:58:26.35 and Joshua Ashley coming a distant third in 2:02:09.58.

With his focus largely on the pool, Breytenbach admitted afterwards that his friends had convinced him to try out open water swimming.

“I wasn’t expecting much because it was my first 10km so I was just trying to stick with the group for the first couple of laps and then hopefully someone would try and break away mid-race, which happened luckily. So we just went from there and had a good ending,” he said.

Finishing in the top two meant Breytenbach is now eligible for selection for the team to represent South Africa at the World Championships at the end of June – something that’s come as a bit of a surprise to the pool swimmer.

“I didn’t know there was world champs this year for open water so I only heard about it on Thursday on my flight,” he said. “Coach Neville [Smith] told me that he would like me to win the 5km and the 10km so that I can represent us there in Budapest.”

Meanwhile, also part of the same race were the 16 and 17-year-old swimmers competing in the 7.5km event. It was 16-year-old Keegan Wright who outsprinted Sven van der Linde for top honours, finishing in 1:34:13.27 with Van der Linde second in 1:34:18.87. Liam Ellis then battled it out with Jeandre Kleynhans and edged ahead to take third spot in 1:35:06.98.

“The first two laps felt pretty good,” said Wright afterwards. “Sven was with me the whole way, constantly pushing each other, going back and forth. The last lap was then all about pushing as hard as I could.”

“It was a tight one, it hurt a lot, but Keegan was stronger on the day so well done to him.”

Both Randle and Breytenbach were back in the water for the final event of the day, guiding their Aquatics Gauteng Tshwane mixed 4x1.25km relay team to victory in a combined time of 1:00:02 (along with Stephanie Houtman and Reece Zowitsky).

Racing concludes on Sunday with the women’s and men’s 5km events. All the action can be followed via live streaming on: http://swimsa.org/news/sa-open-water-swimming-championships-2022