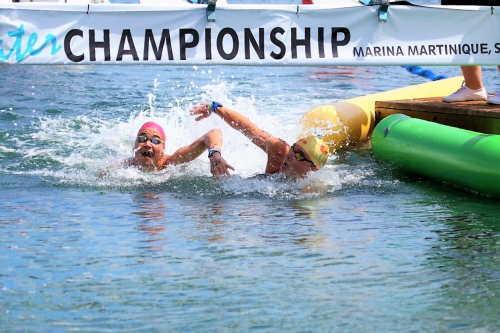 Prior to the weekend, Ruan Breytenbach considered himself a pool swimmer, but after completing the 5km and 10km double at the SA Open Water Championships at Marina Martinique, the 20-year-old will be switching focus.

Just like in the 10km race a day earlier, the men’s 5km race came down to a last-lap battle between Breytenbach and Durban’s Connor Buck, with a frantic sprint to the finish. And once again it was Breytenbach who claimed the win. The Pretoria swimmer only just beat his rival on the touch, finishing in 59 minutes 1.64 seconds, with Buck second in 59:01.73.

“It was way different to yesterday’s 10km. It was a bit stacked the whole way and I tried to break away at the beginning of the second lap but I didn’t want to waste any energy so I fell back a bit until the last lap,” Breytenbach said afterwards.

“Connor had a stronger finish than yesterday… That put a lot of stress on me today so but luckily I got it.”

As for the prospect of representing the country in both the 5km and 10km races at the World Championships, Breytenbach added: “I’m definitely excited. I’m going to have to change my training programme now to prepare for that which I wasn’t planning on doing. If I do get selected and do well there, then I will probably do more open water.”

Buck was happy with his weekend performance. “It was tough. I wanted to push for the gold. I gave it everything I had today and Ruan just had a little bit more at the end and managed to out-touch me,” he said. “But overall I think I had a good race. I’m glad to have finished in the top two because that qualifies me for the world champs in Budapest in July.”

Earlier in the day, the women’s 5km race a much more clear-cut affair with Catherine van Rensburg dominating the race. She powered ahead of the pack for a solo victory in 1:01:12.01 – over a minute ahead of her rivals.
The teammate who beat her to 10km gold two days earlier, Amica de Jager, finished in second in 1:02:12.81, with 3km champion Samantha Randle third in 1:02:18.25.

“I felt great from the start. I decided to push it and then I saw nobody wanted to come with me so I just pushed and saw how big I could make the gap,” said Van Rensburg after the race. “I was just making sure I made the gap bigger and bigger… I was hoping Amica was going to come with me so I could slip[stream] her but it didn’t happen, so I just went for it,” added the 18-year-old.

De Jager was thrilled for her training partner.

“Catherine took it out super hard today and she had such an incredible swim so I’m happy for her,” said the TUKS swimmer. “The rest of us were just trying to chase her down but it was not to be today.

“We got caught up a bit in the pack dynamics at the start – it was quite hectic, but Catherine got an awesome break and she just went for it which is amazing.

“We’re teammates, we train together so it was great to have that little switch-around [for first and second positions in the 10km and the 5km] so it’s going to be so exciting to be able to go to world championships with her,” added de Jager. 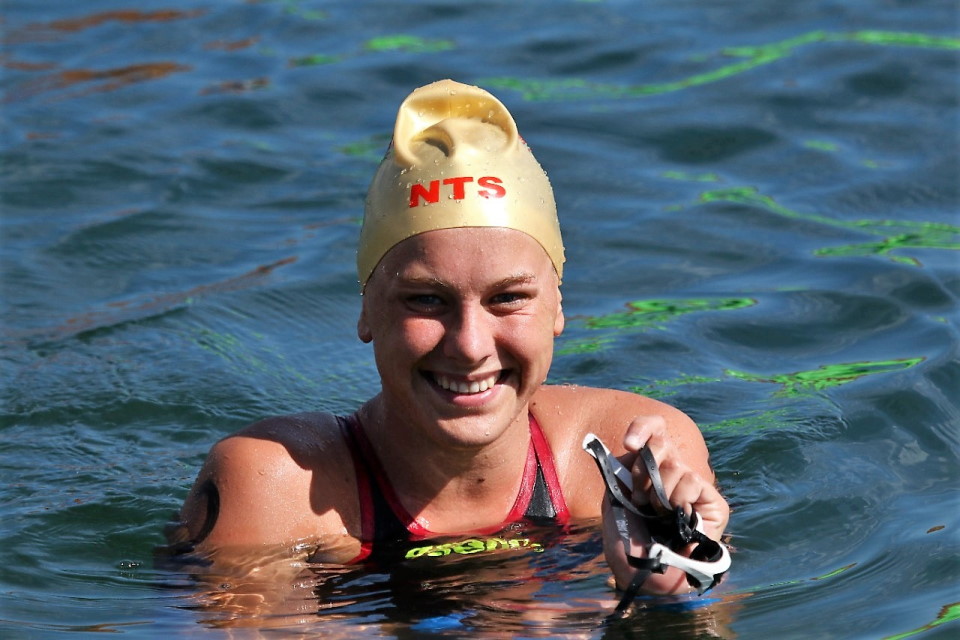