Another golden evening for SA swimmers in Monaco 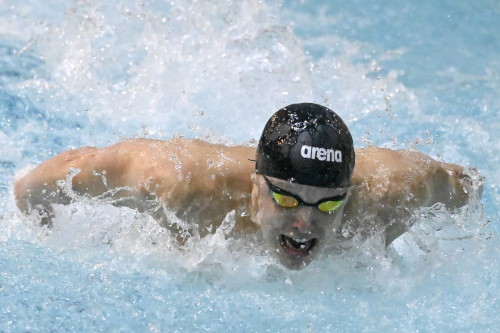 Matt Sates picked up where he left off on day two of the Mare Nostrum meeting in Monaco on Sunday, adding two more gold medals to his identical haul from Saturday.

First up was the 400m individual medley where the Maritzburg swimmer claimed victory in 4:12.74 – almost five seconds ahead of Britain’s Olympic fourth-place finisher in Tokyo, Max Litchfield.

“Coming to Monaco has really been a treat, especially racing against so many people like Olympic finalists and Olympic medallists and competing with them. It’s always nice to have that extra experience,” said Sates.

“The first day went well. I had a good 400 free to start it off so I was happy to get the gold and then to get the meet record in the 200IM and with a PB, I was pretty happy.

“Then the second day with the 400IM and the 200 free – it’s quite a tough double so I was happy to get the two golds again,” he added.

Good friend Pieter Coetzé then followed suit in the 200m backstroke. The 18-year-old held off 100m backstroke gold medallist Yohann Ndoye-Brouard to take the title in 1:58.71. The Frenchman was second in 1:58.91.

Coetzé returned to the pool later in the evening for the final two-man showdown of the 50m backstroke skins and outgunned Ndoye-Brouard (24.96) again in 24.81 seconds to take another gold.

“I’ve being enjoying racing my first Mare Nostrum a lot and I’ve been learning a lot. I haven’t raced a lot of international meets before so it’s very nice to get the experience and race some of the big names in the swimming world,” said Coetzé.

“I’m happy with the performances from the first leg, just to get into it and shake off the travel a little bit. I’m feeling good in the water now… I’m happy with the times and to get the double gold today was great, especially with the competition that I had, so it was nice to pull it off.”

Having taken 100m breaststroke silver on Saturday, SA’s latest budding breaststroker Lara van Niekerk went one better in the 50m event. Also swum in the knockout skins format, she powered to victory almost a second ahead of Sweden’s Sophie Hansson in the final in a sensationally speedy meet record time of 29.90 seconds.

“I really enjoyed the skins format and getting to do the 50 five times,” said a thrilled Van Niekerk. “It was good training – each one got a little bit faster so I was super-happy about that and now I can check back on the video and see what I need to improve.

“There’s also more and more pressure when there are less people so it was good learning how to deal with that, I enjoyed it,” she added.

Chad le Clos was once again pipped to the post by Switzerland’s Noe Ponti – this time in the 100m butterfly. Ponti claimed the gold in a time of 51.76, just three hundredths of a second ahead of the veteran South African who had to settle for another silver.

Rebecca Meder just missed out on a medal in the 200m individual medley, finishing fourth in 2:13.59. The title was taken by Dutchwoman Marrit Steenbergen in 2:12.22, with Maria Ugolkova second in 2:12.55 and Dalma Sebestyen third in 2:13.18. The other South African in action, Brenden Crawford, finished seventh in the men’s 100m breaststroke final in 1:02.20.

The next leg of the Mare Nostrum series takes place in Barcelona from 25-26 May 2022.