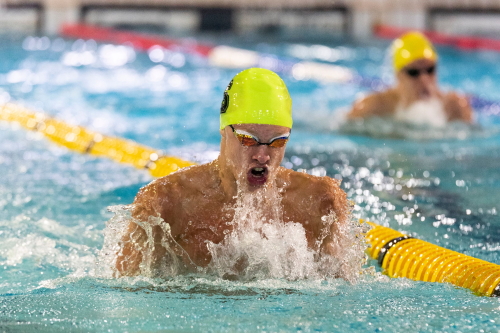 Maritzburg teenager Matt Sates defeated an Olympic champion on his way to winning two more gold medals at the second leg of the Mare Nostrum swimming series in Barcelona on Wednesday.
The 18-year-old was once again in sensationally speedy form, claiming both 400m individual medley and 200m freestyle golds – both in personal best times.
Sates claimed the 400IM title in 4:11.58 – over a second faster than a few days ago in Monaco – finishing ahead of Hungarian David Verraszto (4:13.54) and Britain's Max Litchfield (4:16.21).
In doing so, he came within .36 of a second of Laszlo Cseh's meeting record set 14 years ago.
Sates was back in action in the 200m freestyle where he came up against Britain's Olympic champion Tom Dean, who had set a meeting record in the morning heats. Undaunted by the challenge, Sates's characteristic powerful finish saw him edging out the Tokyo gold medallist, finishing in an even quicker time of 1:45.91 – yet another meet record. Dean was second in 1:46.27 with Japan's Katsuhiro Matsumoto third in 1:46.46.
"I'm super-happy, coming from the four golds from the last leg – obviously I wanted to still try and carry on the momentum from that," said Sates afterwards. "I'm very happy to gain another two and keeping the streak going, especially racing people at such a high standard."
As for beating Dean in the 200m freestyle, Sates added: "Doing the 200 free later against the Olympic champion – I was super-happy to be in that race with him and to get the win. So I couldn't be happier with the momentum and how the race turned out. I'm now looking forward to tomorrow. I've got the 200IM – that will be my main race to focus on so hopefully that goes as well as the other ones."
Meanwhile, the other South African medallist on the night was fellow teenager Pieter Coetzé. Just like he did in Monaco four days ago, the Pretoria swimmer claimed a bronze in the 100m backstroke. The race was won by Italian Thomas Ceccon in 53.18 with Japan's Ryosuke Irie of Japan second in 53.46 and Coetzé finishing third in 53.72.
The event continues on Thursday with both Sates and Coetzé looking to add to their rapidly rising medal count. Sates left Monaco with four gold medals last weekend while Coetzé claimed two golds and a bronze.
Supplied.