Nine from nine for golden Sates at Mare Nostrum series 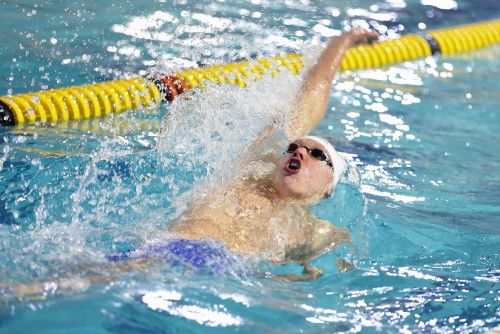 Matt Sates completed an astounding clean sweep of golds in each of his events at the Mare Nostrum series in Europe by clinching victory in the 200m individual medley in Canet, France on Sunday night.
Having secured 400m individual medley gold on Saturday, the 18-year-old race to one more win on the final night of the event on Sunday.
Swimming in lane three, Sates stormed into the lead on the butterfly leg but dropped well back on the backstroke. He made up significant time on the breaststroke leg but was still second behind American Samuel Stewart at the final turn.
True to form, the Maritzburg star’s final 50m of freestyle saw him storming to the front and then winning by a body length.
Sates clinched the gold in 1:57.77 with Stewart second in 1:59.15 and Olympic bronze medallist Jeremy Desplanches third in 1:59.28. That brought his total of gold medals to nine from nine events.
“I was happy to go under 1:58 again so this is my third best time,” he said afterwards. “The Mare Nostrum tour is something my coach has always told me we would go to, and I’ve enjoyed it and learnt a lot.
“Racing swimmers at this level has been amazing although when you suddenly realise you are racing for big prize money, it does make you a bit nervous. But I’ve always been told to concentrate on the race and performance, so that’s worked for me,” added Sates, whose efforts saw him finishing third in the overall Mare Nostrum standings.
Earlier in the evening Lara van Niekerk also added to her significant medal haul, taking silver in the 50m breaststroke. The 19-year-old finished second in 30.25 behind Olympic 100m breaststroke champion Lydia Jacoby, who took the gold in 30.20.
Van Niekerk finished the series in second place overall in the women’s standings – with a spectacular meet record time of 29.90 seconds in the 50m breaststroke in Monaco among the highlights of her week.
Saturday’s double gold medallist Pieter Coetzé capped off his own successful week of racing with a bronze medal in the 100m backstroke.
Japan’s Ryosuke Irie claimed the gold in a Mare Nostrum record time of 53.00 with Frenchman Yohann Ndoye-Brouard taking silver in 53.15 and Coetzé third in 53.84.
The next major assignment for South Africa’s swimmers will be the World Championships in Budapest, Hungary from 18-25 June.
“I think this is a perfect build up to Budapest and I hope I can continue with some best times there as well,” said Sates, whose coach Wayne Riddin expressed his excitement at what the future holds for these talented swimmers.
“I’m excited to be part of this young group of swimmers coming through with Matt, but having Pieter and Lara with us this time to now learn what this competition is all about shows what the future holds for us,” said Riddin.
“With the Olympics just two years away, I hope sponsors come forward to support these youngsters to prepare to win medals in Paris. We did well on this Mare Nostrum, now it’s the turn of the SA public to help these kids achieve realistic goals.”
Supplied.