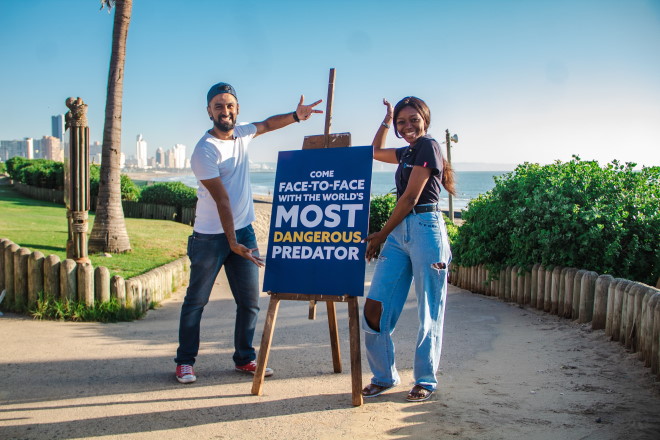 Earlier this month, a team from WILDOCEANS, a programme of the WILDTRUST, had members of the public on the Durban beachfront shivering in their slops after they were asked to come face to face with the world’s most dangerous predator – which was in a mysterious tank covered in black cloth.
WILDOCEANS is the driving force behind the “Shark & Ray Protection project” – a 3-year project being implemented together with multiple partners with an overarching objective of increasing protection for sharks and rays, which include some of the most endangered species on the planet – arguably even more than rhino and pangolin.
The Shark Attack campaign is underwriting this project and has become known as a clever, edgy and relatable way to educate the public on this species with such a bad reputation; showing sharks as the hunted and not the hunter we have been led to believe.
As the team approached people on the beachfront, reactions were mixed, and while some were hesitant to see what was in the tank, others curiously followed onto the sand to eventually sit down in front of the display. When seated and asked to guess what could be in the tank, responses included a python, an escaped crocodile from Tongaat and even plastic. “Plastic is going to kill us one day,” commented one of the participants.
Anxiously waiting for the WILDOCEANS team to lift the black cloth a father and son duo argued over who should sit closest to the display. Later, two cousins jumped up and fell off the chair as the cloth was lifted. So, what did they see?
The mysterious tank housed two shark shaped mirrors, revealing the most dangerous predator on the planet… humans.
Emotions ranged from confusion, relief and finally acceptance that humans are far more dangerous than sharks themselves. Humans are responsible for killing approximately 100 million sharks globally due to a combination of bycatch, fisheries, pollution, trade, loss of critical habitat and negative perceptions linked to sharks.
“There is strong scientific evidence proving how important our sharks are in balancing our ocean ecosystem,” said Dr Jennifer Olbers, a Marine Scientist at WILDTRUST. “Surely, we as humans entering the ocean should be modifying our behaviour to protect them rather than trying to eradicate them.”
South Africa is in a unique position to spearhead efforts in the conservation of sharks, as our waters are home to around 200 shark and ray species and are a top 3 global biodiversity hotspot. South Africa can provide sanctuary for the species if we can successfully promote non-consumptive and sustainable use.
“The sea is not the same without the shark,” shared a concerned citizen. “People can do better; people can choose to do better.”
“We hope our activation helped inform some of the Durban public about the plight of shark (and ray) species, as well as help shift negative perceptions about the species and informed future behaviour,” said Campaign Lead, Lauren van Nijkerk. “An ocean without sharks is an unbalanced, unhealthy ocean – and an unhealthy ocean means we will ultimately face a world without us.”
WATCH: https://www.facebook.com/SharkAttackCampaign/videos/547916020318093
PHOTOGRAPHER CREDIT – Mnqobi Zuma
Supplied.