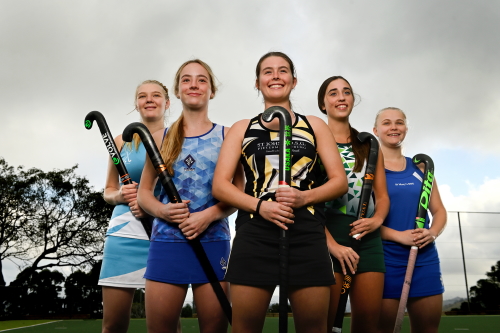 The tenth edition of the Grand Finals of the SPAR KZN Schoolgirls’ Hockey Challenge is set to take place at St Mary’s D.S.G. over the weekend of 23 and 24 July.

Two days of highly competitive hockey is expected to unfold on the astro as the top ten regional winners from the KZN challenge descend on Kloof. Leading up to the Grand Finals, the tournament travelled throughout KZN to ten regions, where 70 schools in total participated.

The first to cement their spot for the Grand Finals this year was the intrepid team from Pionier Hoërskool. This is the second time that the dynamic team from Vryheid have hoisted the trophy in the Northern KZN Regional but due to CoViD interruptions, they will be making their first appearance at the 2022 Grand Finals.

The second team who secured their spot are no strangers to the Grand Finals. St Anne’s College will be making their ninth visit, representing the Pietermaritzburg North Regional. In their eight runs at the finals, they have featured in the medal games in every year, including winning gold in the inaugural tournament in 2011.

The third team to have earned a place are the determined St John’s D.S.G. waving the flag from the Pietermaritzburg Central Regional. This is the second time that they have made it all the way, with their first outing five years ago where they ended fourth overall.

Being crowned the Durban North Regional champs, Our Lady of Fatima have played at the Grand Finals three times, finishing a notable fifth overall at each of their previous excursions.

Host of the weekend, St Mary’s D.S.G. were the fifth team to score an invite after they won the Highway Regional. Similarly, to St Anne’s College, they have already featured at the Grand Finals eight times, with an impressive collection of silverware over the years, including being the overall defending champion and having their name engraved on the trophy five times.

Making their second trip to the Grand Finals, the hard-working team from Amanzimtoti representing the Durban South Regional, Kuswag Hoërskool made it all the way in the first tournament back in 2011, where they finished ninth overall.

Back for the fifth time, the Ugu and Sisonke Regional winner, King Edward High School have earned the reputation as the Grand Final dragon slayers. Over the years they have been a thorn in the side for a number of the more established teams, causing a bit of a stir in the pool games. This feisty team’s stats reveal that they have finished as high as sixth a couple of times in their four previous tournaments.

Another newcomer to the finals is Domino Servite from the uMvoti and oThukela Regional. In recent years, the team have grown from strength to strength, with a flourishing display on the field in their regional, ensuring their first outing to the Grand Finals.

For the tenth time and the only team with a 100% record being at every Grand Final, Durban Girls’ College are back. Representing the Durban Central Regional, College have a fantastic record at this tournament including three golds, three silvers and a bronze and have participated in a medal game every year.

Returning for their fourth run are the North Coast Regional winners, Grantleigh College. The last team to earn an invite to the Grand Finals have finished a consistent eighth in their three previous contests.

If you can’t get to the side lines, you can catch all the action from the Grand Finals on SuperSport Schools. All the games will be livestreamed on either their mobile app or via their website.

Pictured here; Sticks at the ready, ten teams from around KZN will be heading to the tenth Grand Finals of the SPAR KZN Schoolgirls’ Hockey Challenge that takes place at St Mary’s D.S.G. Looking forward to getting on the turf are Anandi Strydom from Kuswag Hoërskool; Sarah Bright, captain from Our Lady of Fatima; Olivia McDonald, captain from St John’s D.S.G.; Bianca Borrageiro, captain from Durban Girls’ College and Paige Webber from St Mary’s D.S.G..