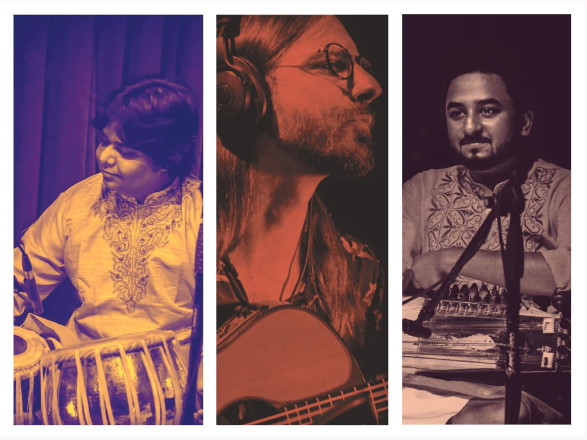 Just weeks before South Africa went into lock-down, award winning artist Guy Buttery was invited to perform a concert tour of India. It was on this trip that Buttery collaborated with tabla master, Mohd. Amjad Khan and sarangi virtuoso, Mudassir Khan. The tabla is the principal percussion instrument from the Subcontinent and the sarangi is the 43 stringed “Indian box cello”. The fruits of this collaboration resulted in their celebrated trio album One Morning in Gurgaon, which was released in both the UK and on vinyl in Japan. Garnering rave reviews from across the globe, their record made the Album of the Year list for NPR and also charted at #10 on the World Music Charts in Europe. This Winter Guy is returning the favour and has invited both of these artists for a National tour of South Africa, kicking off at the National Arts Festival in Makhanda before moving through the Western Cape, KwaZulu-Natal and Gauteng.

Prior to their first performance in India together, all three musicians had never actually met before, let alone made any music together. Before their first concert they had only ’practised’ via voice recordings and exchanged texts somewhere between Hindi and English to break down the various parts of the set. Ultimately it was this unrehearsed approach, combined with the inauspicious and eleventh-hour nature of their first meeting, which provided the stardust for their collaboration. Guy explains, “Due to Delhi traffic, our intended dry run was shaved right down to a single 60 minutes, giving us just enough time to shake hands, share a chai and tune our instruments. As a result, we went in totally blind to that first concert, yet what unfolded on stage over the next hour left me in complete awe - so much so that after our performance I immediately set about asking anyone who would listen how we could track down a local studio to capture our newly formed trio. As luck would have it, the very place where we had performed that first night had a basic recording set-up and we somehow managed to secure a single morning to record.”

Both Mohd. Amjad Khan and Mudassir Khan are renowned masters of their respective instruments, steeped in the Indian classical traditions from a young age. Although guardians of their musical heritage, One Morning In Gurgaon highlights their willingness to push the envelope of their instruments, expertly highlighted by Amjad whose tabla playing is marked by uncanny intuition and masterful improvisational dexterity. Likewise, Mudassir has harnessed the potential of the rare and notoriously difficult sarangi, an instrument whose sound most resembles that of the human voice, and an instrument which Guy confesses to, “Being overly obsessed with.” The combined experience of Guy’s acoustic guitar wizardry with these two Indian master musicians culminates in an experience which is as pure and uninhibited an example of empathetic collaboration as you’ll find anywhere: A musical conversation between musicians exchanging each other’s ideas in the spur of the moment and feeling out the areas of crossover with a depth that goes far beyond mimicry.

Since their spontaneous recording session in India, the trio have not seen each other. The upcoming SA performances will reunite these three artists in a once-off, not to be repeated national tour.

“A spontaneous dream. A compendium of enrapturing sonic stories.” - PopMatters

“Dexterous, defiant and delicate all at once.” - Texx and The City

“magically spirits you away to this land of enduring mystery and majesty.” - The Herald

“these masterly improvisations weave from strands of several musical traditions a rich tapestry that is downright mesmerizing.” - Minor7th