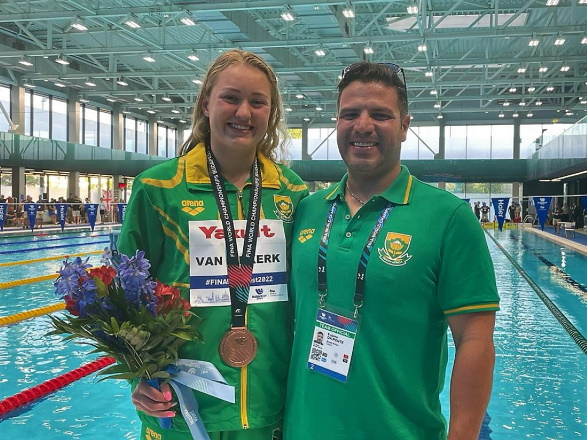 Lara van Niekerk ensured South Africa’s proud record in the World Championships pool continued by bagging a bronze medal in the 50m breaststroke on Saturday night.
Competing in her first major event at senior level, the 19-year-old came up against world record-holder Benedetta Pilato and 2013 world champion Ruta Meilutyte in the final.
Van Niekerk swam 29.90 to take the bronze, with Meilutyte taking gold for Lithuania in 29.70 and Pinato the silver for Italy in 29.80.
Van Niekerk’s performance means South Africa have claimed a medal at every long course World Championships since Roland Schoeman’s solitary bronze in the 50m freestyle at the 2001 event.
“Surprisingly I wasn’t that nervous. I thought I would be way more freaked out than I was,” admitted the talented teenager. “I was actually very calm and just focused on what I had to do and how I had to execute the race, so I think that was a really good thing – learning how to manage the nerves.
“I’m so happy. My first senior world champs and winning a medal, I think it’s a bonus,” she added.
The last time Van Niekerk competed at a world championships in Budapest was the junior edition as a 16-year-old back in 2019 where she finished just off the podium in fourth, with a then 14-year-old Pilato taking the gold.
Asked about her progress since then, Van Niekerk reckoned: “I’m definitely happy with the improvement. If you look at my time at junior worlds, it’s a two-second difference. I’m just happy to be improving, it’s a good sign.”
Meanwhile, Van Niekerk’s coach, Eugene da Ponte was thrilled with the medal, particularly with an eye on the next month’s Commonwealth Games in Birmingham.
“That was half the reason we decided to come here, to deal with the more high-pressure situation so that when we get to Commonwealth Games, we can really focus and try to swim really fast. This was more for experience and that’s going to be for trying to get the times we really want. I’m looking forward to it. I know Lara is too.”
Supplied.