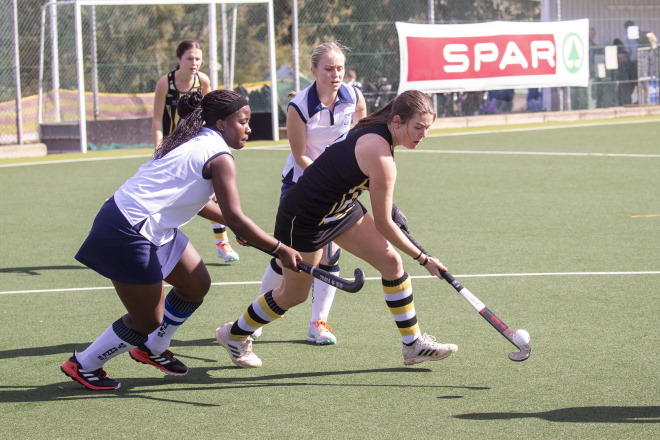 After seven years, Durban Girls’ College reclaimed the title of the SPAR KZN Schoolgirls’ Hockey Challenge at the tenth Grand Finals where they met host school, St Mary’s D.S.G. in the conclusion of the tournament.

In the recent Grand Finals, St Mary’s have dominated with four consecutive wins. The only team in the tournament to have a 100% record at the all-important weekend, Durban Girls’ College have met St Mary’s in the main game three times and in their third clash, managed to release the host school’s firm hold. In the history of the tournament, St Mary’s have hoisted the trophy five times, and with College’s latest victory, they now have four spectacular wins.

The game got off to a quiet start as both teams took some time to settle the nerves. Building momentum, the pace intensified as they determinedly attacked on either end but were unable to break through the sterling last line of defence after some great runs and quick, precise passes.

In the 30 minutes of running play, both teams earned one short corner each, as well as a couple of long corners. With time running low, St Mary’s managed two great runs down the side lines, causing Durban Girls’ College’s defenders to scramble at the back but the exciting breaks didn’t amount to any goals. As the final whistle blew, the gold silver game had no scores being recorded, meaning six players would head to the circle for the deciding penalty shootout.

Amy van Rooyen from Saints got proceedings underway but her fine attempt frustratingly hit the upright. Next up, Emily Macquet netted the first goal for College. Levelling up the scoreline, Georgie Pollock got St Mary’s first in the second round. Edging her team one goal up, Tara Pakendorf knocked in the second for College. All pressure fell on Elizabeth Anderson from St Mary’s who fired off a fantastic shot but desperately watched as it shaved the upright, going just wide of the goals, resulting in victory for Durban Girls’ College.

The bronze medal game was a Pietermaritzburg derby, where St John’s D.S.G. met rivals St Anne’s College. St Anne’s netted the first goal in the first minute, but St John’s stepped up a gear and fired in three well-crafted goals in response, giving them their best result in their two appearances at the Grand Finals, their first podium position.

Over the history of the tournament that started in 2011, 935 teams from around KwaZulu Natal have participated in 110 regional tournaments. 16,380 girls have taken to the turf in the ten annual regionals, with a total of 2,010 matches being played.

The bronze medal game was a Pietermaritzburg derby, where St John’s met rivals St Anne’s College. St Anne’s Georgie le Seur netted the first goal in the first minute, but St John’s stepped up a gear and fired in three well-crafted goals in response. St John’s captain, Olivia McDonald equalised with a flick from a short corner midway through the first half. Not long after the second half started, Jess Allen put her team ahead with 32 seconds. Then Aimee-Rene Jacobs took the game further away from St Anne’s with her goal in the final 7 minutes.

This is the ninth appearance at the Grand Finals for St Anne’s College, and they have featured in the medal games every year with a variety of podium finishes over the years. This is the second fourth place. For St John’s, this is their best result with their first podium finish in their two runs at the finals. In their 2017 appearance, they met St Anne’s where the roles were reversed, with St Anne’s finishing third and St John’s fourth overall.

Pictured above: St John’s D.S.G.’s Captain Olivia McDonald retrieves a pass from a teammate as St Anne’s College Captain Bahati Dakile with Ali Spencer behind tries to foil attempt during the bronze playoff at the Grand Finals of the SPAR KZN Schoolgirls’ Hockey Challenge that took place at St Mary’s DSG in Kloof on 23 and 24 July. Durban Girls’ College took the honours against St Mary’s in the Finals in a penalty shootout 2-1.