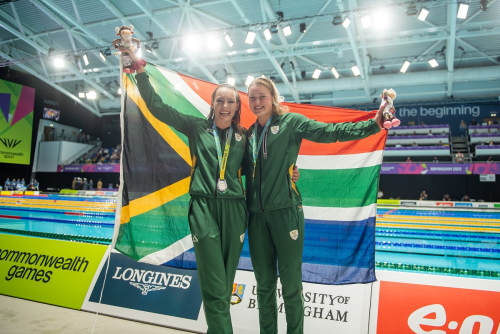 South African swimmers added three more medals to the team haul on the penultimate night of competition at the Commonwealth Games in Birmingham on Tuesday.

Lara van Niekerk led the way by adding a second gold to her collection – this time in the 100m breaststroke.

The 19-year-old led from start to finish to claim victory over compatriot and Olympic silver medallist in the event, Tatjana Schoenmaker, in a personal best time of 1:05.47. Schoenmaker took the silver in 1:06.68 and Australian Chelsea Hodges the bronze in 1:07.05 with South Africa's other swimmer in the final, Kaylene Corbett, finishing seventh in 1:07.62.

“I just tried to swim with a comfortable stroke, so I felt really good on the first 50 and I knew Tatjana was going to come back at me in the second 50,” said Van Niekerk afterwards. “It’s always like that so I was just trying to keep going. I died a bit in the last 25 but the crowd kept me going and gave me extra adrenaline so it was a good race.”

Schoenmaker added: “It was obviously a very challenging race. My back end, I wasn’t as strong. I really did die as well. Lara really challenges me to push myself to go faster in the first 50.

“The times aren’t really there for me, but I still gave everything I could and it was the best performance I could have given tonight,” she added.

Later in the evening, 18-year-old Pieter Coetzé completed his collection of medals, adding a 200m backstroke bronze to the 100m gold and 50m backstroke silver he's already won in Birmingham. He swam a sensational final 50m to move from sixth place at the turn to secure the bronze in 1:56.77, with England’s Brodie Williams claiming gold in 1:56.40.

“I normally try to save a little bit for the last 50,” said Coetzé. “It’s been something that I’ve tried to change a little bit because sometimes I find myself a bit too far back or I leave it too late like I did tonight. But I think it was good. I don’t think I’ve ever come back that fast so to come that close to winning after turning sixth was great and I can’t complain about that at all.”

Two-time defending champion Chad le Clos was devasted to miss out on a medal in the 100m butterfly. He finished fourth in the race in 51.61 as Canadian Joshua Liendo Edwards took the gold in 51.24 and England’s James Guy and Australian Matt Temple shared the silver after both finishing in 51.40.

“I couldn’t have trained much harder for this, I tried my best. I thought that I would be better,” said Le Clos. “It’s still a good time for the last three years but I’m so devastated – you can actually not understand. It’s truly, truly devastating for me but it is what it is,” he added.

Elsewhere, Michael Houlie also just missed out on a podium spot in the 50m breaststroke. He flew off the blocks quickest but was just out-touched at the finish to end fourth in 27.36, with home favourite Adam Peaty making up for missing out on a medal in the 100m event by taking gold in 26.76.

“I knew I had a relatively decent start, and I was just swimming my race, looking forward. I glided a bit into the finish and I think that definitely cost me a medal,” said Houlie. “But we learn and so I’m going to take that and I’m even more motivated to get back to work and move on and move forward.”

Aimee Canny finished sixth in the 100m freestyle final in 54.88 with Michaela Pulford also taking sixth place in the 800m freestyle in 8:44.77.
“I went out a bit harder so I think I lacked the legs a little bit at the end, but I was happy just to go out hard, give it everything and there’s a lot to work on speed-wise but I was happy with that,” said Canny.

She later joined forced with Van Niekerk, Coetzé and Le Clos in the 4x100m mixed medley relay at the end of the night, but the quartet also just missed out, finishing fourth behind winners Australia in 3:44.38.

Meanwhile, Rebecca Meder progressed through her 50m backstroke semi-final, finishing fourth in 28.69 to book a spot in Wednesday’s final. Olivia Nel was fifth in the same race in 28.73 and just missed out on making it through.

“I’m really, really happy with that,” said Meder. “I’ve got a lane, I’ve got a chance and I’m just so privileged to be here. My goal coming in was just to make a 200 IM final and I’ve gone over and above that.”

Clayton Jimmie finished sixth in his 50m freestyle semifinal in 22.62 and did not progress to the final, but was nevertheless thrilled with his performance.

“I’m very happy. I couldn’t ask for a better swim. I swam a very good time this morning and I backed it up this evening with a PB,” he said. “I was trying to focus on the first 25 because I know if I get the first 25 right it’ll set me up for the rest of the race, so I’m happy.”